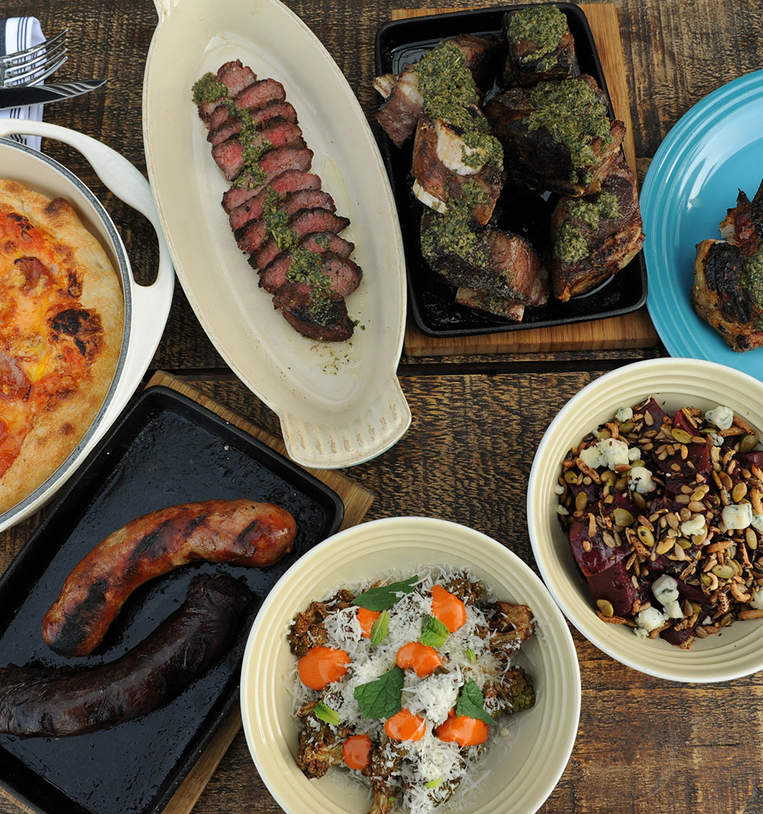 For the Alberta beef 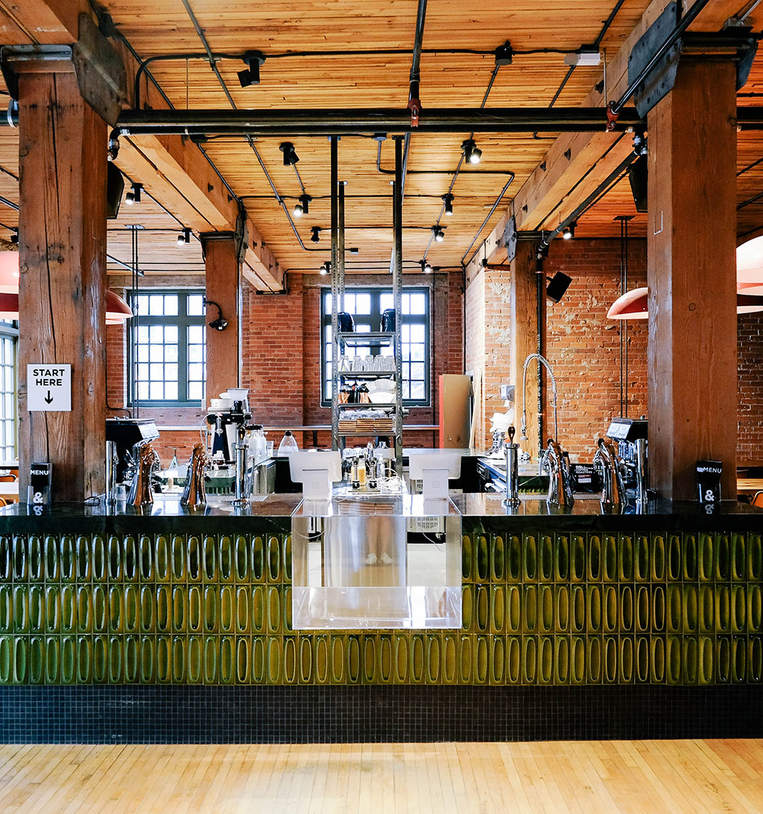 For coffee and breakfast sandwiches

Start your day with a trip to Phil & Sebastian Coffee Roasters for a single-source-origin espresso and an egg and crispy smoked meat sandwich. This Calgary chain’s latest outpost in the Mission neighbourhood is decked out with white marble countertops, blond walls, original artwork and a state-of-the-art Kees van der Westen “Spirit” espresso machine. 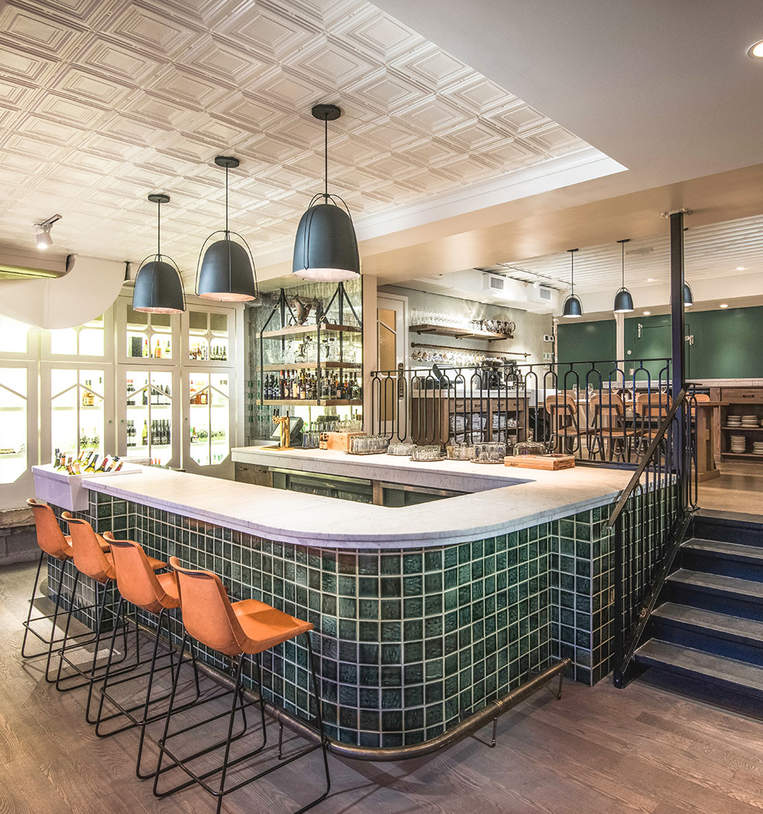 For the chicken and dumplings

Pigeonhole serves favourites that have been on the menu since day one, such as chicken and dumplings and red Kuri squash with burrata and honey. Don’t miss the Hakurei turnips with pear and chawanmushi (a delicate egg custard) or the duck, parsnip and sea buckthorn. 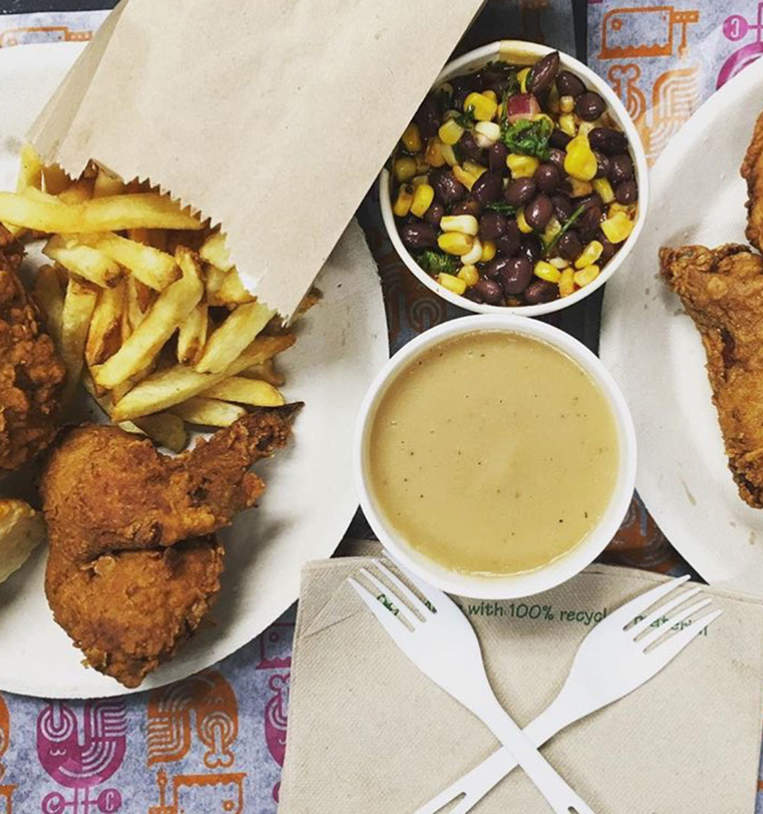 For a takeout lunch 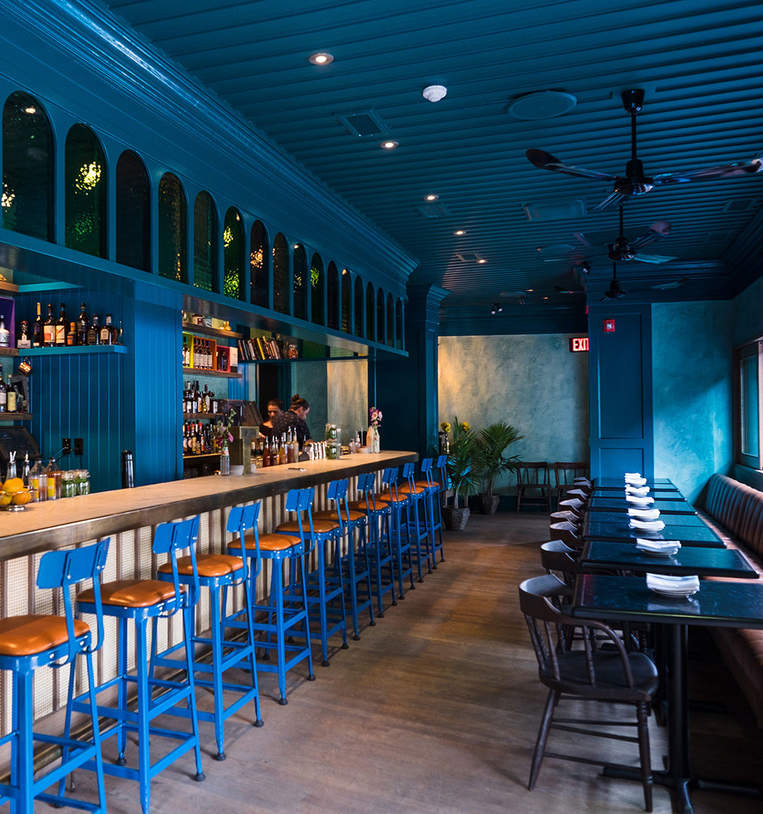 Just off 17th Avenue, Ricardo’s is loved for its kitschy island vibe and $13 cocktails. Rum is the house act, with a list that features favourites like mojitos, mai tais, pina coladas and dark ‘n‘ stormies. Dishes are casual and include a variety of snacks and tapas-style starters, such as plantain chips and ceviche, with jerk chicken and spicy curries rounding out the mains. 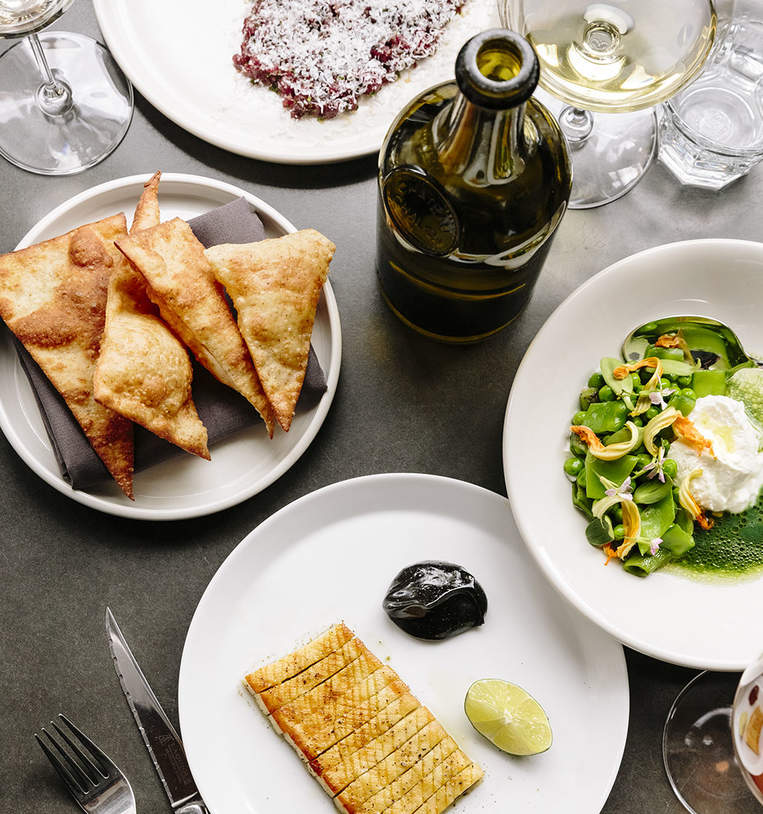 For comfort food with a view

Relax on the enclosed veranda at a century-old farmhouse overlooking the Elbow River. The pros behind the River Café cater to a sophisticated crowd with smoky Laphroaig-forward Foibles & Sins cocktails and panzanella salads with walnuts, housemade ricotta and Red Fife sourdough croutons. A shallow bowl of Artisan sake rice and shiitakes swimming in a rich mushroom dashi is a comfort-food adventure in umami. 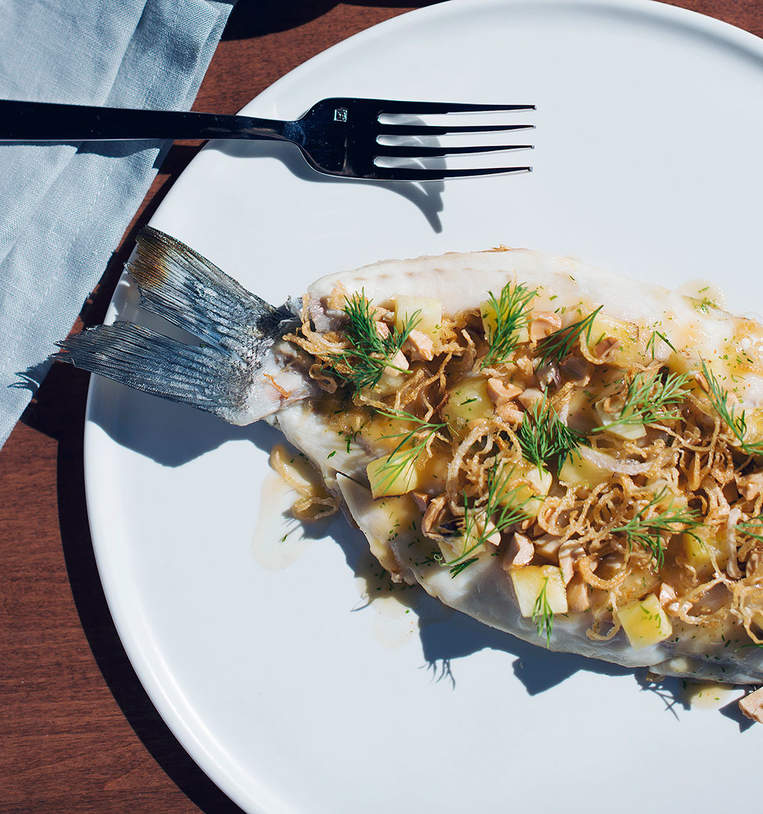 For the tiki cocktails and vegetarian foie gras

Picture a Pacific Rim surf shack designed by Ralph Lauren. Ceiling fan spinning lazily; outdoor patio in high revelry and tiki drinks on the move. Welcome to Lulu Bar on a summer evening. Beyond the mahogany and surfboard wall art, pineapple makes a (menu) statement, from a Negroni made with aged pineapple rum to lightly pickled in a raw salad served atop macadamia butter (a vegetarian foie gras cooked with liquors and puréed with butter) to a wood-fire-grilled branzino with pineapple apple garum (a saucy combination of pineapple, chili, maple and a little fish sauce mixed with grilled chunks of pineapple) garnished with dill and toasted peanuts. Even the sparkling sake screams summer with Fukucho’s citrusy, champagne-like Seaside Junmai. Lulu Bar was a contender for Canada’s Best New Restaurants in 2019. 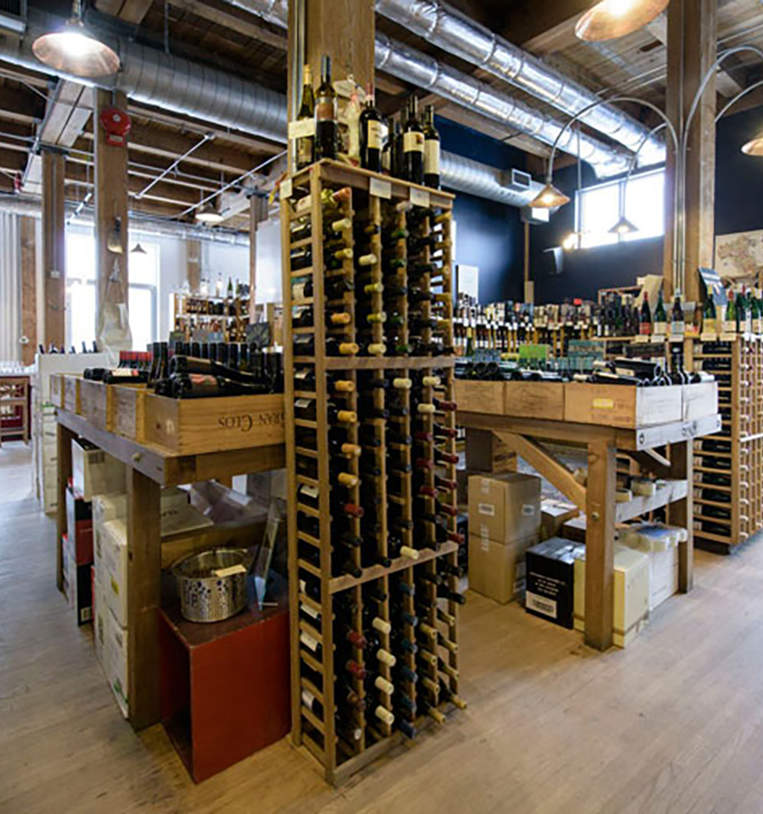 This large, airy room attached to the Cookbook Company carries an excellent selection of wines and spirits. With the spotlight on family-owned French and Spanish wineries, Metrovino hosts unique tastings and events at the Calgary Wine Tasting and Education Center next door. 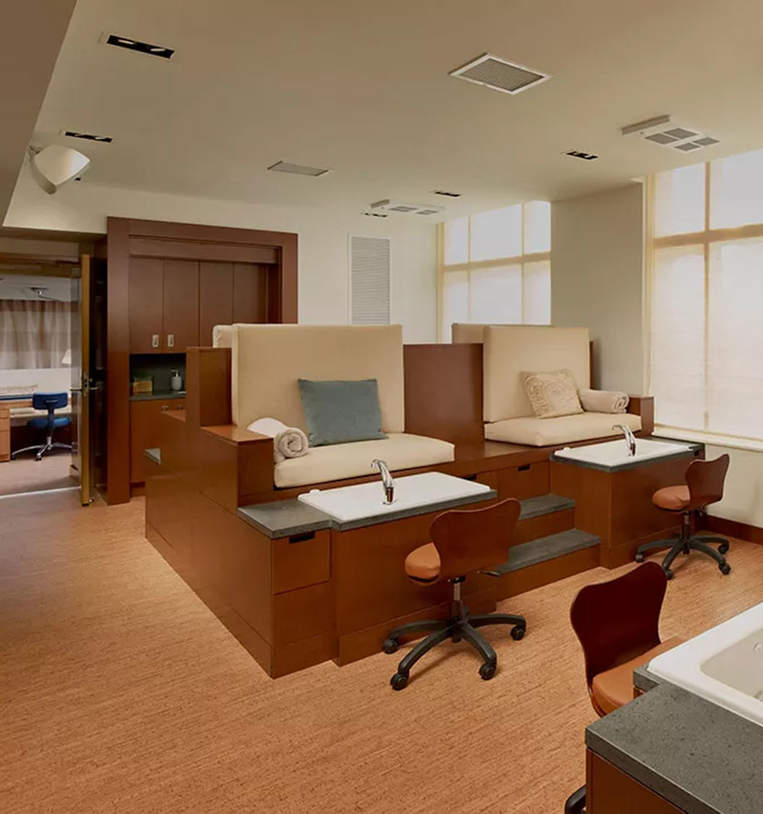 After a deep-clean facial, a trained esthetician at Stillwater Spa at the Hyatt Regency Calgary will apply a Luzern rescue-remedy serum. In addition to Vitamin B5, it contains essential fatty acids to ease dryness – a notorious side effect of Calgary’s high elevation. 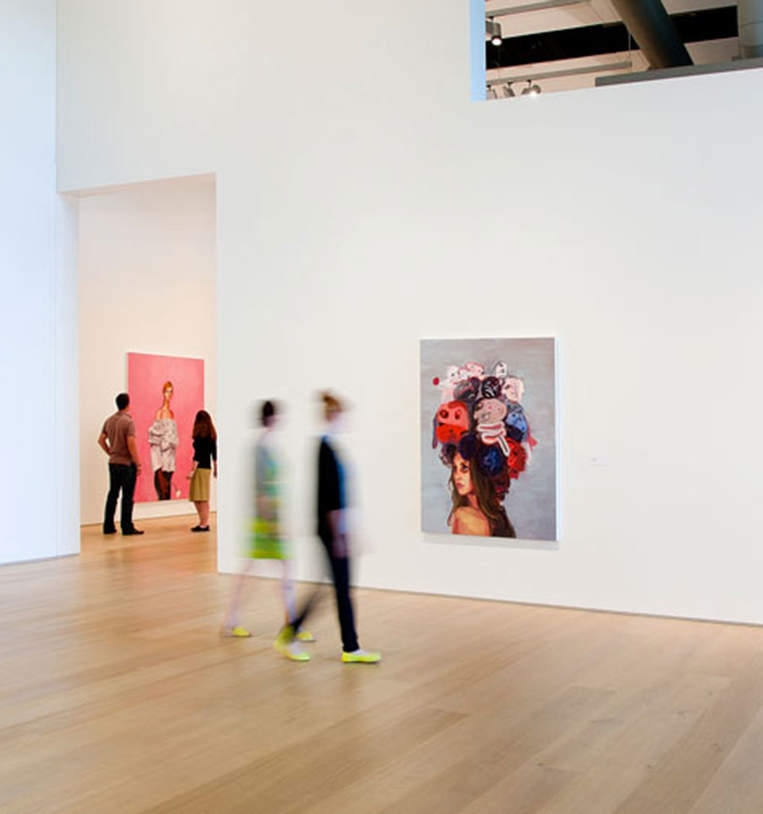 Inglewood’s once empty warehouses and packing plants have given way to a mix of design stores, cafés and contemporary galleries. Check out the custom suiting for men at Espy, then stop by the Esker Foundation, located on the top floor of the Atlantic Avenue Art Block, a four-storey building dedicated to retail and art galleries. An integral part of the Art Block, the Project Space is home to a rotating series of displays visible from the street 24 hours a day. 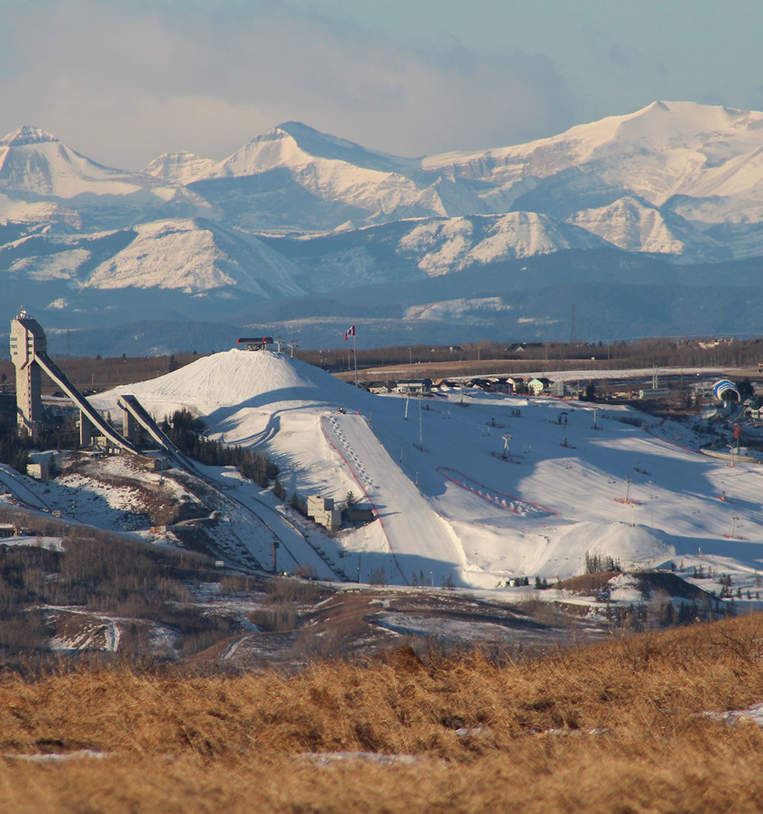 For the love of sport

On winter weeknights, the Canadian Olympic Park is a favourite skiing spot for Calgarians looking to keep their legs in shape for weekend excursions to Banff. If you visit in the summer, try the perfectly safe (but harrowing) indoor luge course. 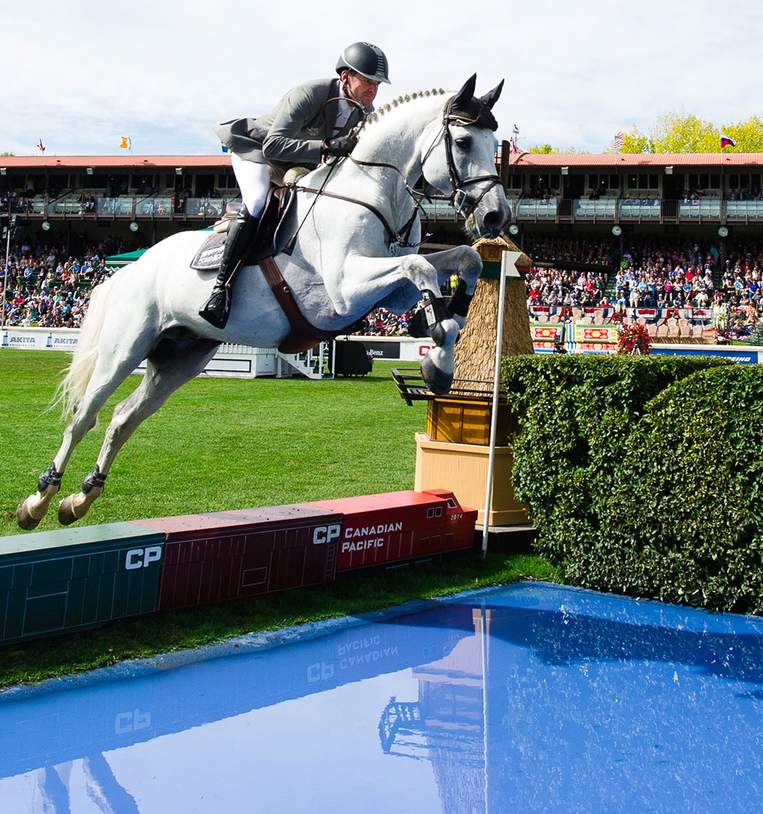 For the horse jumping

A fixture on the international show-jumping competition calendar since 1976, this world-class facility is open year round, accessible to competitors and spectators alike. The five-dollar admission price has remained the same since day one. 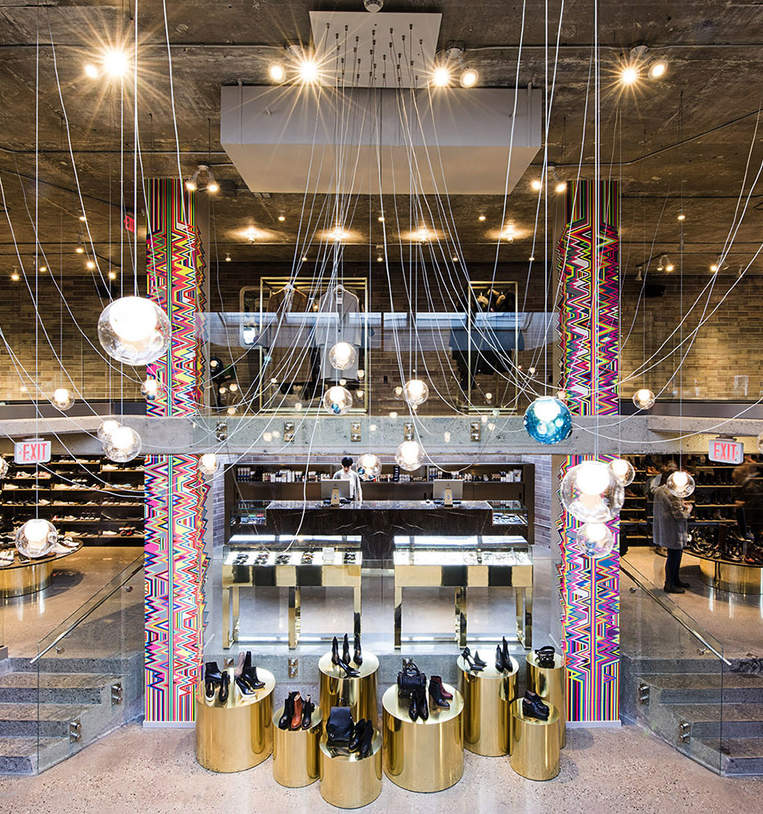 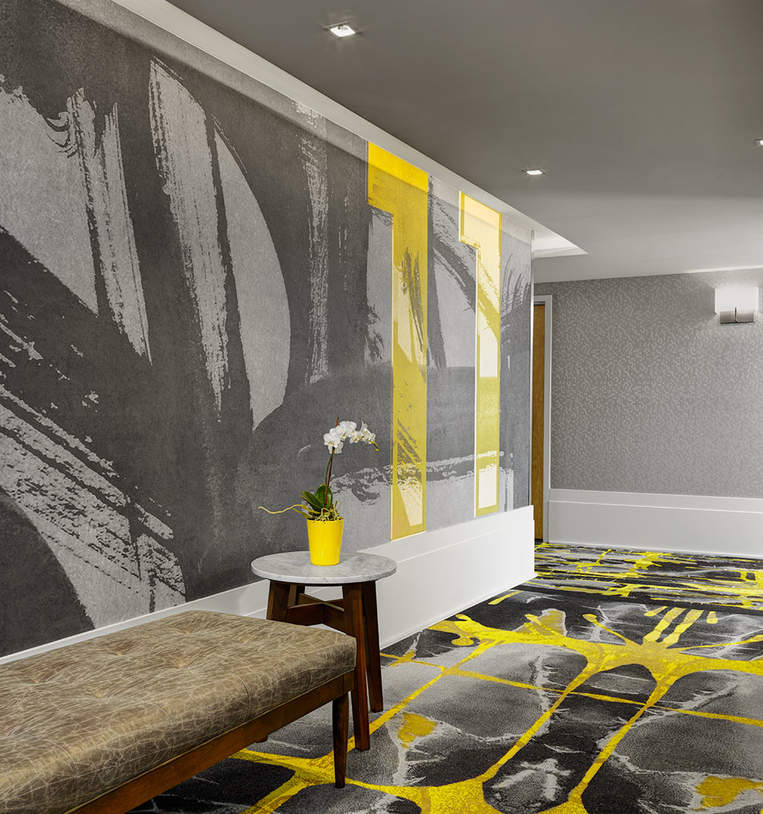 Located just minutes away from the fairgrounds of the Calgary Stampede, the boutique Hotel Arts is the perfect place to lean back and wash off the dust in your Luxury Suite. Then, quench your thirst on the sleek poolside patio with one (or several) custom cocktails. 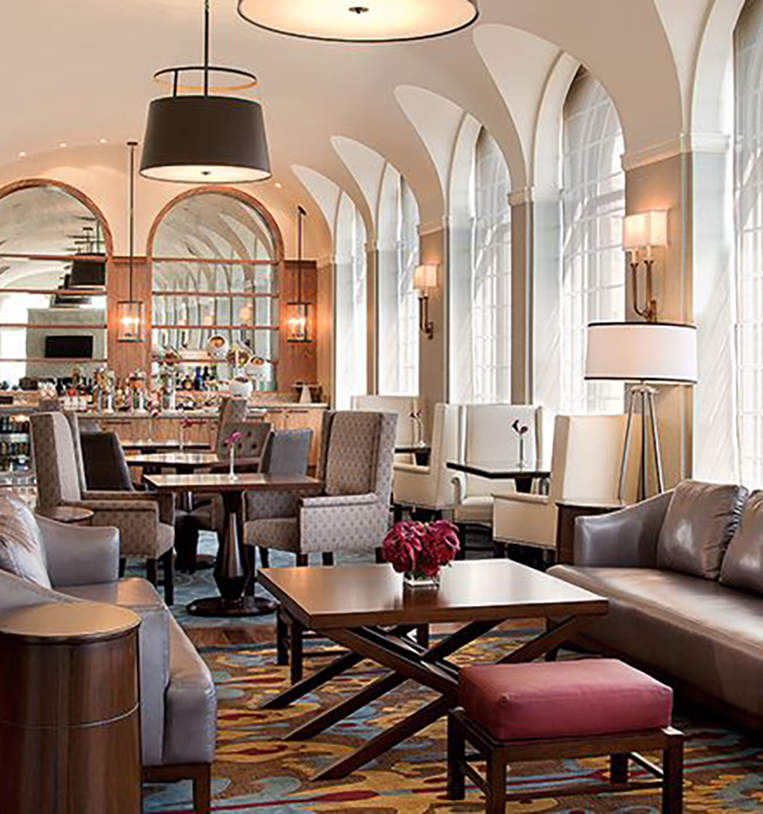 The Palliser’s Edwardian Commercial style reflects the all-business attitude of its downtown location. The Rimrock Restaurant has been the venue of choice for handshake deals among the city’s power brokers for half a century. 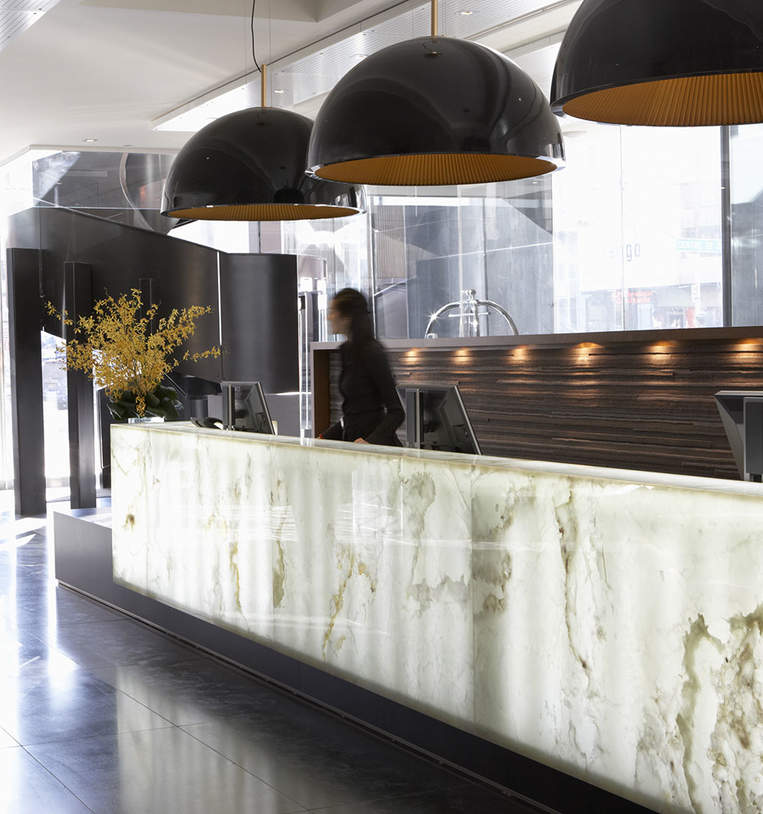 For the rooftop haven

Surrounded by the gleaming skyscrapers of downtown, this hotel aims to impress, from its champagne bar to its rooftop garden. The property features green-minded design elements like geothermal heating, energy-efficient water systems and windows that actually open. Stop by the intimate Charcut Roast House – voted one of Canada's Best New Restaurants in 2010 – if only to dine at its three-metre-long Douglas-fir table. 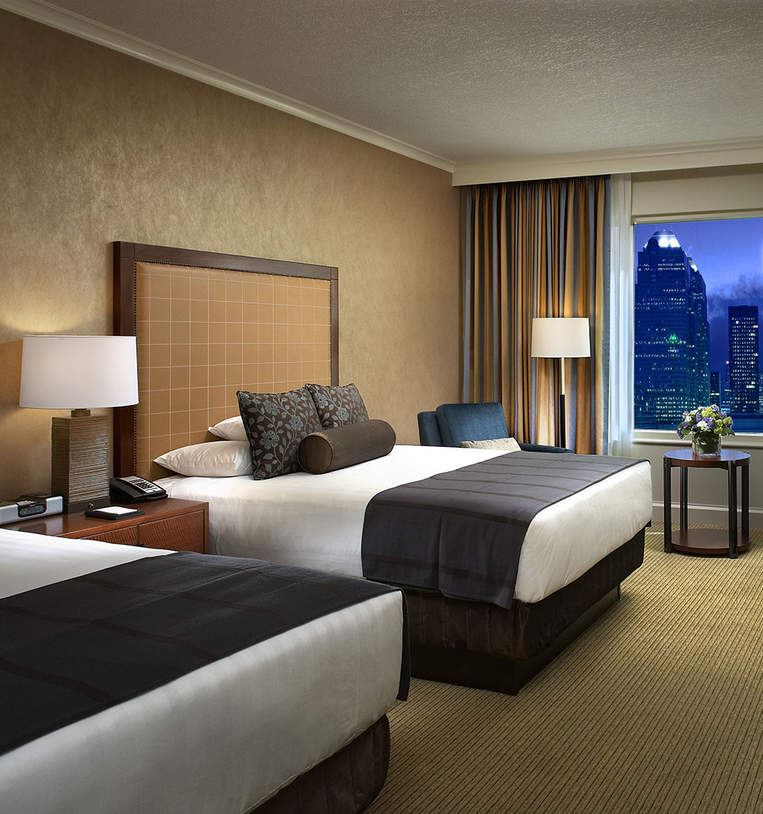 For the pillow-top mattress

The renovated guestrooms of this downtown hotel feature the chain’s signature mattresses, for a truly restful sleep. In the summertime, grab a spot on the patio of the Sandstone Lounge for people-watching along bustling Stephen Avenue. And for a change of dining pace in this steak-loving town, head to the property’s award-winning Catch & The Oyster Bar for fresh and sustainable seafood. 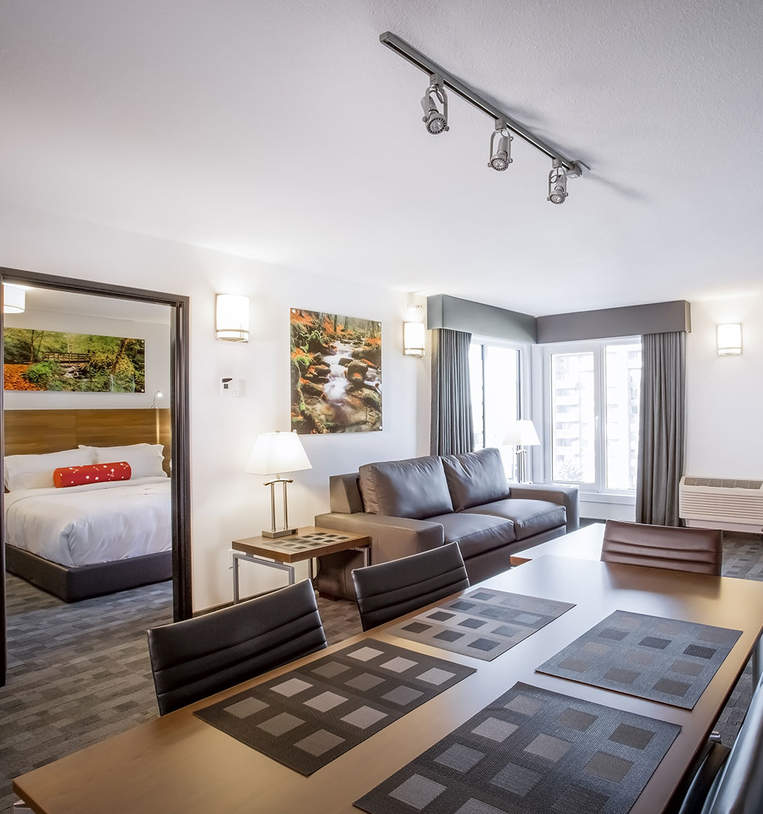 For proximity to the action

With a location near buzzy 16th Avenue South West, this modern property boasts a clean and contemporary design with shiny crimson tiles covering its facade. The bright rooms feature pillow-top mattresses, L’Occitane en Provence bath products and complimentary Wi-Fi. The fitness centre houses Google Maps-enabled treadmills, allowing you to train on a variety of terrains from around the world.

A number of downtown hotels run airport shuttles – call your hotel in advance for details. Meanwhile, a taxi from Calgary International Airport to the city centre costs about $45.
yyc.com

Cabs can be easily hailed from most downtown streets, and most hotels will have a few waiting outside.

There’s no subway system in Calgary, but if you’re going too far to hoof it on the city’s many enclosed walkways and skyways, a city bus or the above-ground Light Rail Transit system should get you where you need to go.

Bike lanes in the downtown core make cycling an easy way to get around. Choose from a variety of bikes at Bow Cycle, including fat tires for the snow, mountain bikes, electric wheels, or a city ride.
403-288-5422, bowcycle.com

Handily numbered streets and avenues make navigating the city delightfully straightforward. In the winter, the fully enclosed Plus 15 walkway system connects a large portion of the city’s downtown core to keep pedestrians warm and cozy.

With heritage breeds and international spicing, Alberta's metropolis is rethinking the steakhouse.

On the Cowboy Trail, horses run wild while sheep and cows wander the flowing foothills that turn into the Rockies o’er yonder. Just an hour outside of Calgary, I’ve got a hunger on, so I stop at the red barn in Turner Valley, the one with the sign that says “Est. 1973.” It’s the Chuckwagon Cafe, where not much has changed since the 1970s: not the wood panelling, not the carpet, not even the cast-iron stove warming a Pyrex pot of coffee. Apparently, the place is famous for its burgers. And when someone tells you a red barn in the middle of nowhere is famous for its burgers, you generally don’t order the salad.

Cowtown, as Calgary is affectionately known, used to be all about steak and potato dinners, with a heaping side of yee-haw charm, but now even classic diners are rethinking meat and taters. With in-house dry-aging, global twists and heritage breeds gaining traction at working ranches, I’m here to check out how Alberta has been beefing up its beef game. My burger at the Chuckwagon Cafe tastes more like a beautifully charred steak than a blue-plate special. That’s partly because owner Terry Myhre started raising organically fed Murray Grey cattle (an Australian breed) on a ranch near Longview, in the foothills, but also because the beef for the six-ouncers is dry-aged for about 28 days, assertively seasoned and cooked just as I like ’em: no prosaic patty here; it’s blissfully blackened, with a pink, juicy centre.

Back in the city, I’m inhaling an obnoxiously great poutine and a butcher steak with chimichurri at Charcut. When the modern steakhouse was opened in 2010 by co-chefs John Jackson and Connie DeSousa, it brought competitiveness and camaraderie to Calgary’s chef-driven restaurant scene. The real place to see that evolution is at their recently opened Charbar in the Simmons building, part of the reimagination of the Bow River in the East Village, where Calgary spent tens of millions of dollars turning a once-derelict part of the riverfront into elegant pathways, parks and possibly the best riverfront patio this side of Texas. In the 1912 warehouse, executive chef and part-owner Jessica Pelland puts the focus on locally sourced meat, vegetables and fish – including beef from a herd of Texas longhorns raised at 7K Ranch, south of Calgary. Pelland knows her way around the 900°F hardwood coal-fuelled parrilla that’s fired up in the kitchen and seasonally on the rooftop: There are short ribs, grass-fed butcher steak and ultra-dry-aged porterhouse steaks, as well as the accompanying Argentine-inspired pit sauces and sides (hello wood-roasted beets, with seeds and queso azul!).

Wandering through the Simmons culinary hub, I find Aviv Fried’s Sidewalk Citizen Bakery. The baker’s legendary organic sourdough loaves and gorgeous pastries are up for grabs, but so too is Alberta beef (heritage Angus from Prairie Land and Cattle) in the Middle Eastern-spun sandwiches and daily stews. (Today’s special is spoon-soft beef cheeks and pomegranate on a bed of almond freekeh.) More international spins can be found on 17th Avenue. Anju does a creative Korean take on carpaccio, spun out of hanger steak, Asian pear, bone marrow, egg yolk, pine nuts and sesame, before moving on to heritage Angus short ribs with sweet soy and kimchi. Meanwhile, a large-format dinner at Model Milk means juicy smoked brisket for two with milk buns, nahm jim and peanuts.

For an oldie but a goodie – and “Est. 2003” is old in Calgary restaurant terms – Vintage Chophouse & Tavern, in the city’s historic Beltline neighbourhood of Victoria Park, offers nine different cuts, including a dry-aged daily “butcher block special,” proudly presented tableside by gentlemen servers in white butcher coats. This is the classic steakhouse experience I remember from nights of yore. I try a tender sampling, from Wagyu to striploin, with killer sides of doughnut-size onion rings and my new standard in creamed spinach, plus a throwback baked Alaska for dessert. As I stuff myself silly while drinking juicy B.C. wines, I lean back, survey the refreshed room and think that a good ol’ steak dinner is feeling like the new cut on the block.