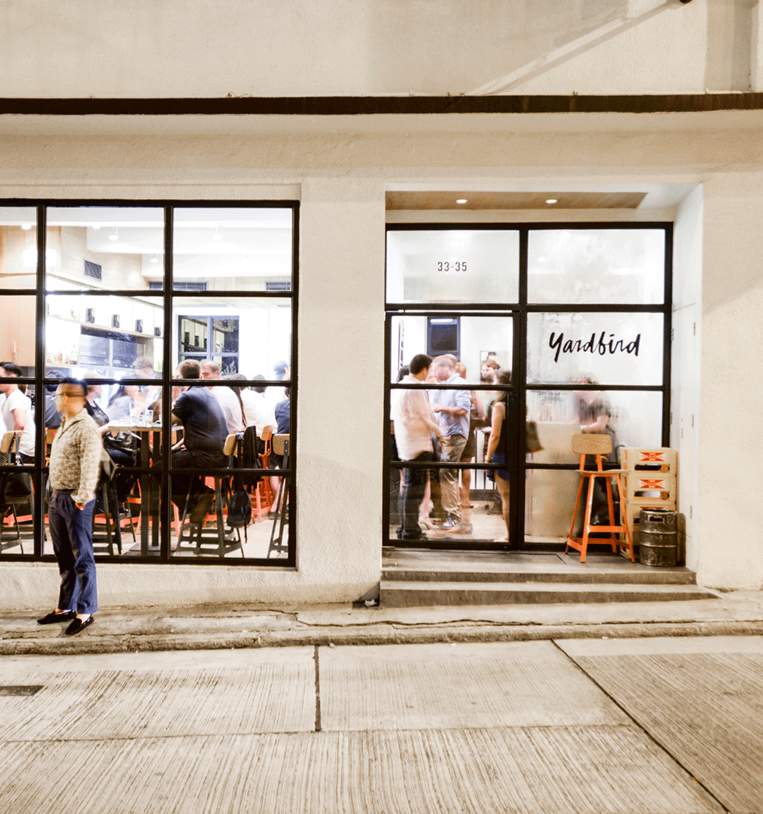 Show up early at no-reservations Yardbird if you want to be seated swiftly. That said, the yakitori, killer cocktails and KFC (Korean Fried Cauliflower) are well worth the wait. 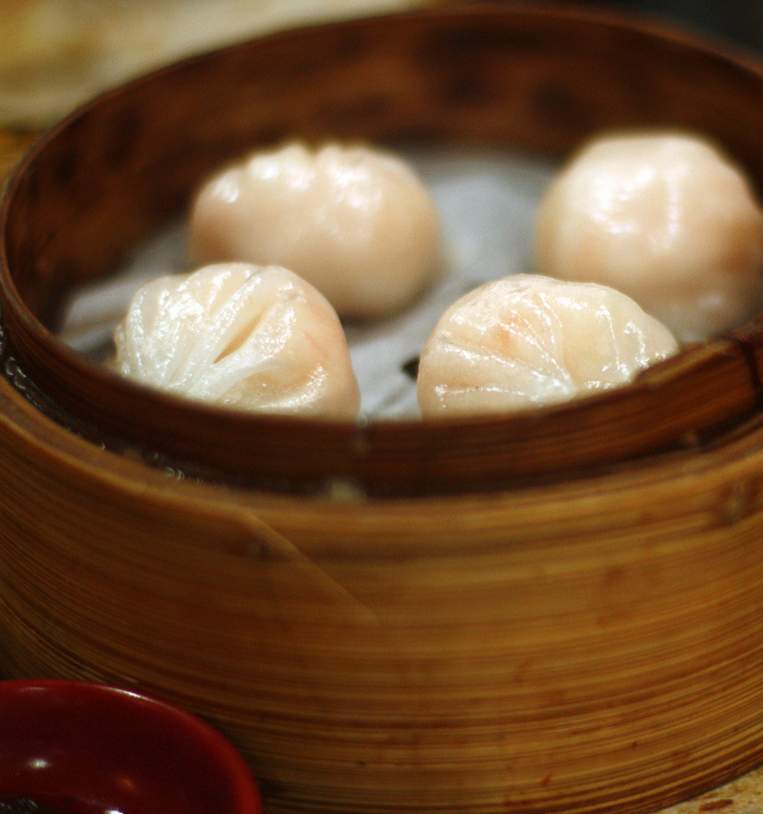 For the Michelin-starred dim sum

One of the world’s most affordable Michelin-starred restaurants, Tim Ho Wan offers authentic, budget-friendly dim sum. Dig into their signature pork buns, loved for their soft yet crispy exterior and barbecued pork filling, or order the pork dumplings topped with goji berries and served with chili sauce. If you can’t make it there during your stay, grab a quick bite before your flight at their other location in IFC Mall above the Airport Express. 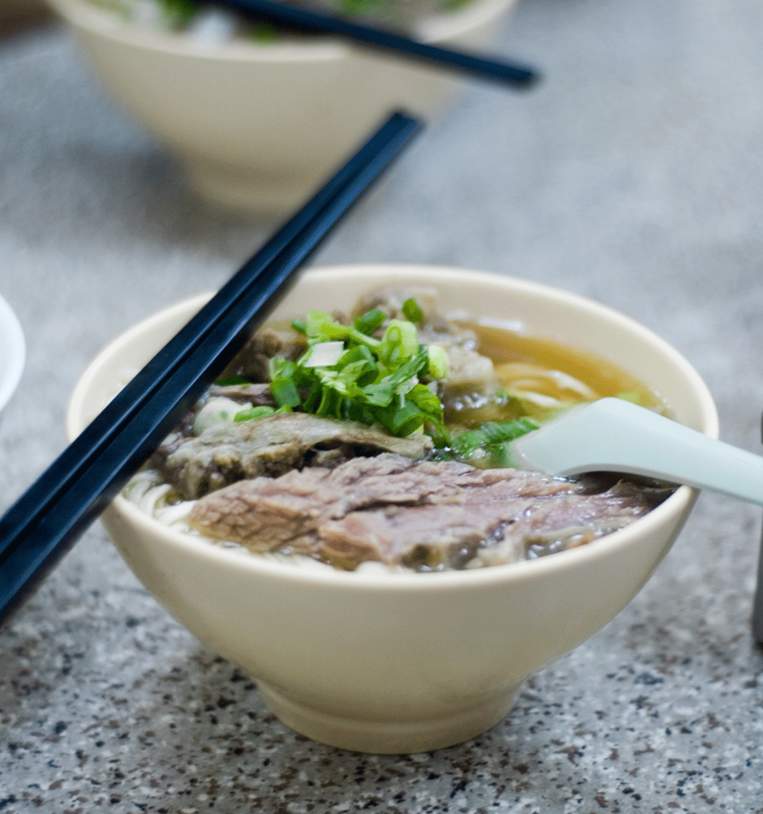 For the authentic noodles

Don’t leave Hong Kong without trying a bowl of Kau Kee’s beef brisket with e-fu noodles. The lineup stretches out onto the street but you won’t have to wait long. Expect to share a table with strangers, a common practice in old-style Chinese restaurants. 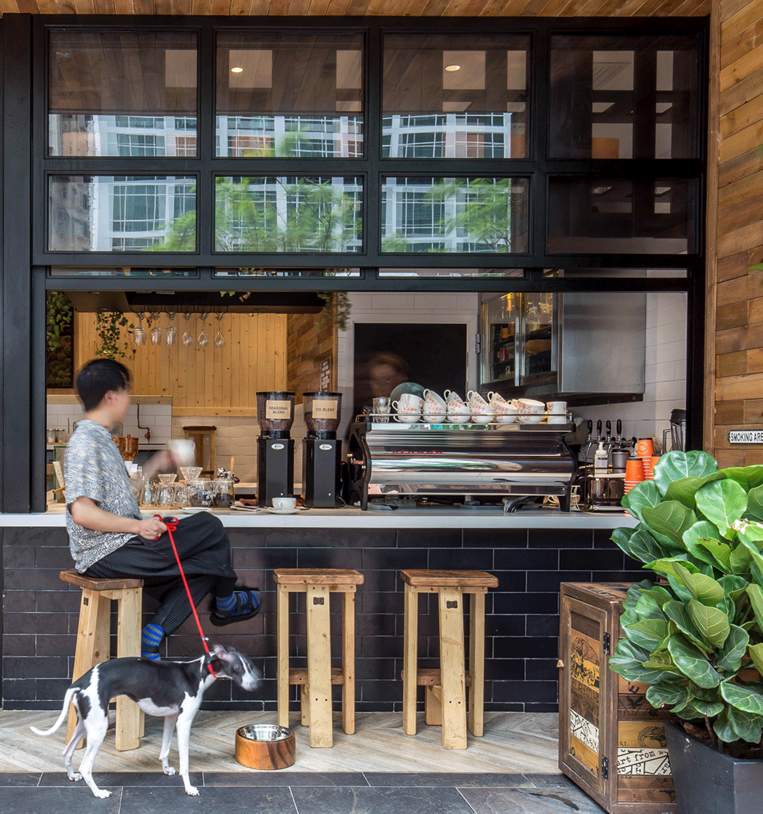 For the perfect cup of coffee

Elephant Grounds is one of the few coffee shops in Hong Kong that roasts its own beans. Pair your coffee with one of the café’s ice-cream sandwiches, made with cinnamon buns, waffles or oversized macarons. Check Instagram for the latest flavours. 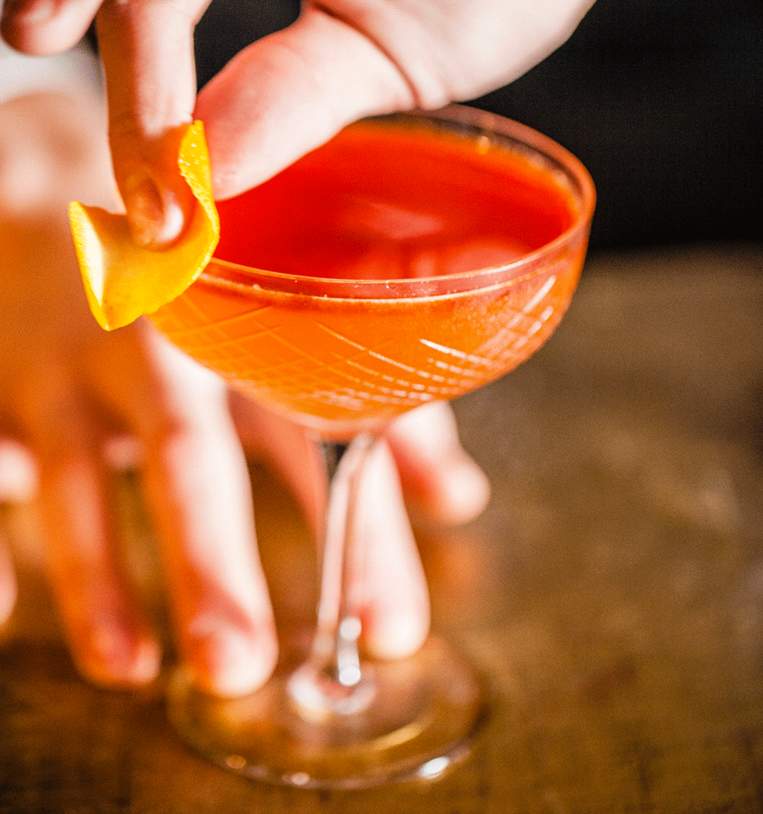 For the classic cocktails

This old-fashioned speakeasy is easy to miss. (Hint: Look for an unmarked entrance below Fish & Meat and walk down the short flight of stairs to a door lit by a single light bulb.) With 150 whisky varieties, it can be hard to make a selection, but the Hawtrey (gin, vermouth, Maraschino liqueur, Angostura bitters) is a standout. 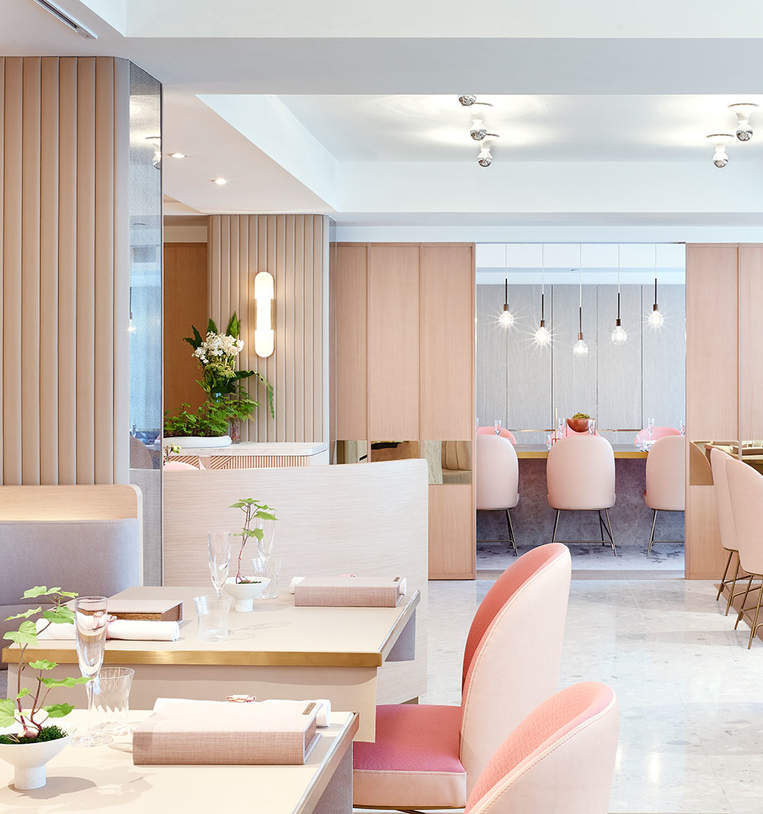 For the French tasting menus

Vicky Lau serves ultra-refined French cuisine with an eight-“chapter” tasting menu at her Michelin-starred restaurant in Sheung Wan. Savour dishes like Ode to Paté en Croûte (made with fresh abalone and pork topped with Shaoxing wine jelly) and Ode to Chestnut Sago Soufflé (served with pu’er ice cream) in an intimate dining room, done up in muted pastels. 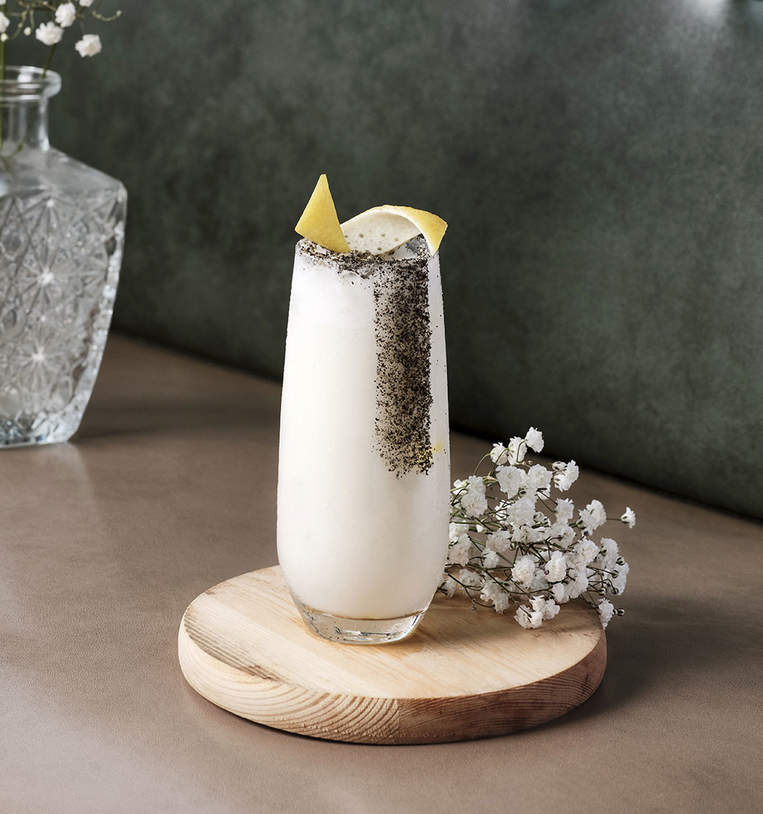 For the open-kitchen dining 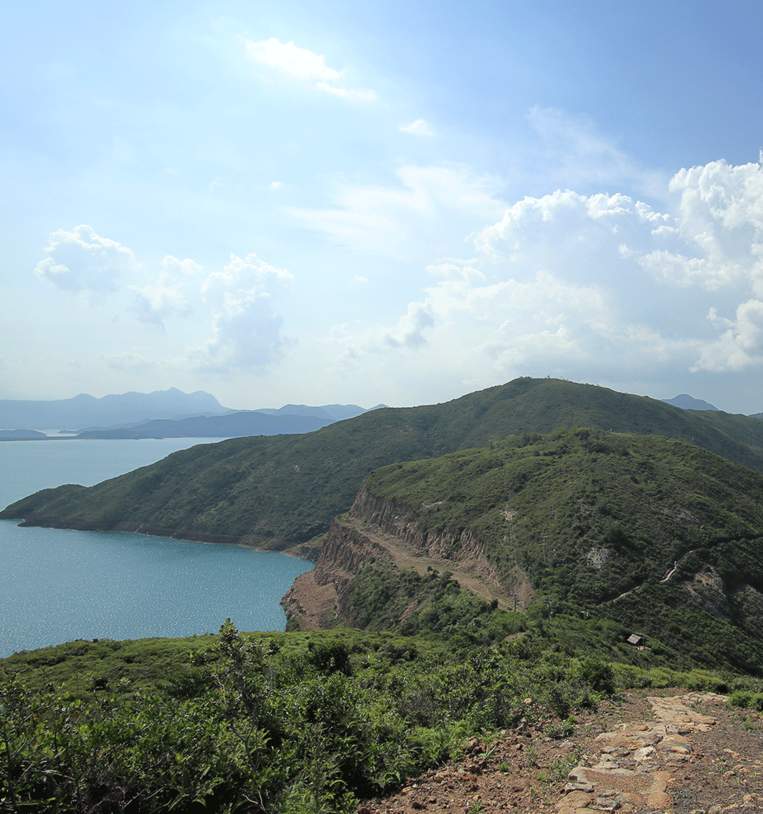 Take a bus from Shatin or Choi Hung subway stations to this fishing village and spend a day enjoying Hong Kong’s oft-overlooked greenery. Hike a section of the MacLehose trail, rent a junk (boat) to a small outlying island, feast on an eye-popping selection of fresh seafood, then cap off the day with a treat at the original location of local mega-chain Honeymoon Dessert. 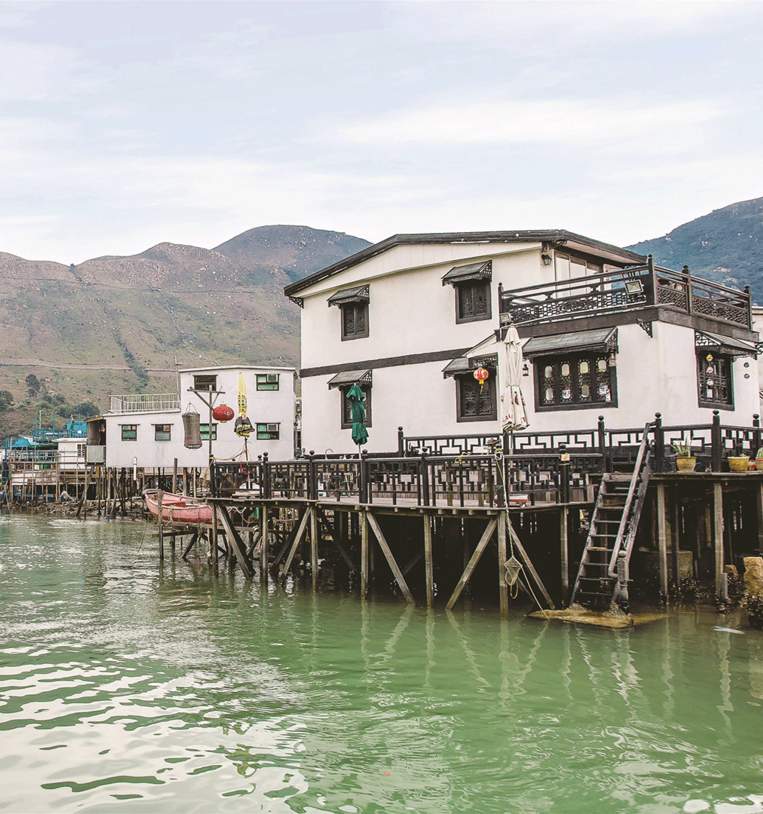 For the photo ops

Take a taxi (or bus number 11) from Tung Chung Station to this small village on Lantau Island, best known for its stilt houses built over the water. Hop on a boat tour for a rare glimpse of pink dolphins, a type of dolphin that is black before turning a pinkish hue when they become adults. 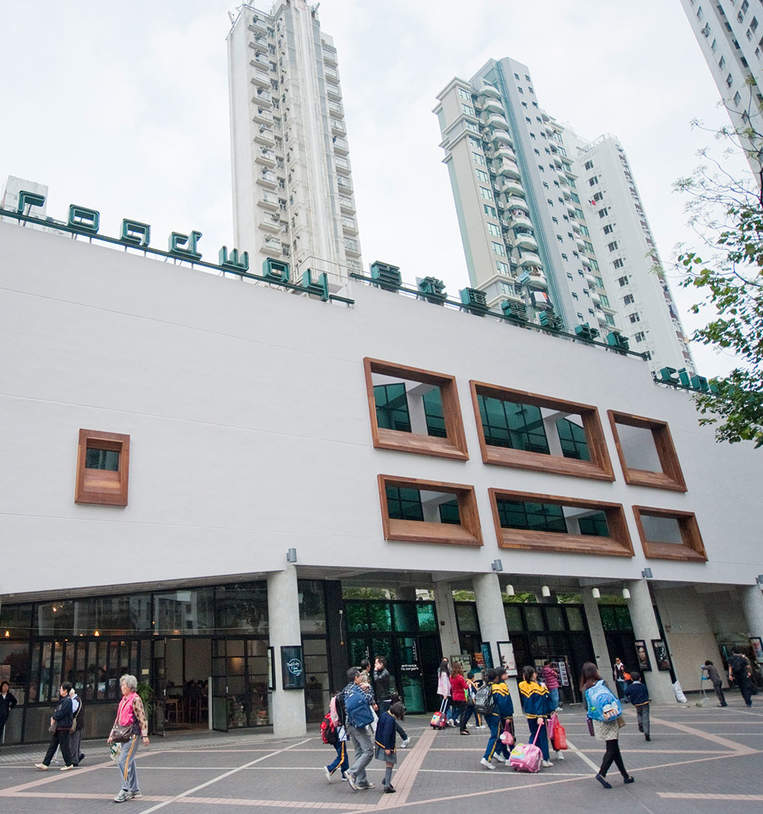 For the indie flicks

One of Hong Kong’s only remaining art house theatre runs new releases and independent films from around the world, and hosts festivals throughout the year. After the show, browse the theatre’s bookstore, and have a rose latte at Kubrick Café. 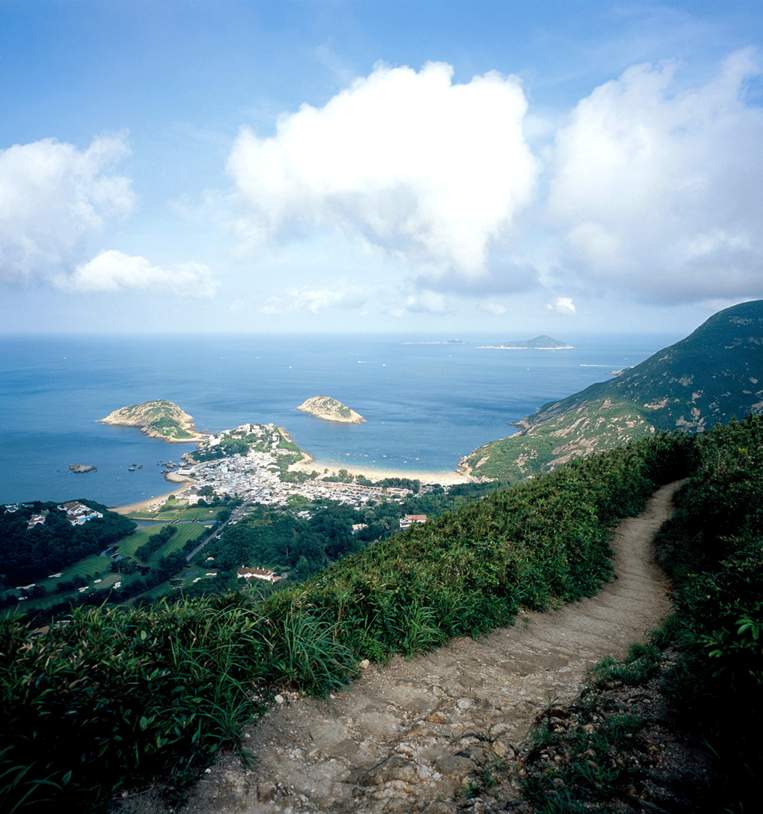 Take a break from the bustling city and hike Dragon’s Back, one of Hong Kong’s most popular walking routes. The trail is 8.5 km long and takes roughly four hours to complete. Enjoy views of Hong Kong Island, and finish your day with a picnic at Big Wave Bay. 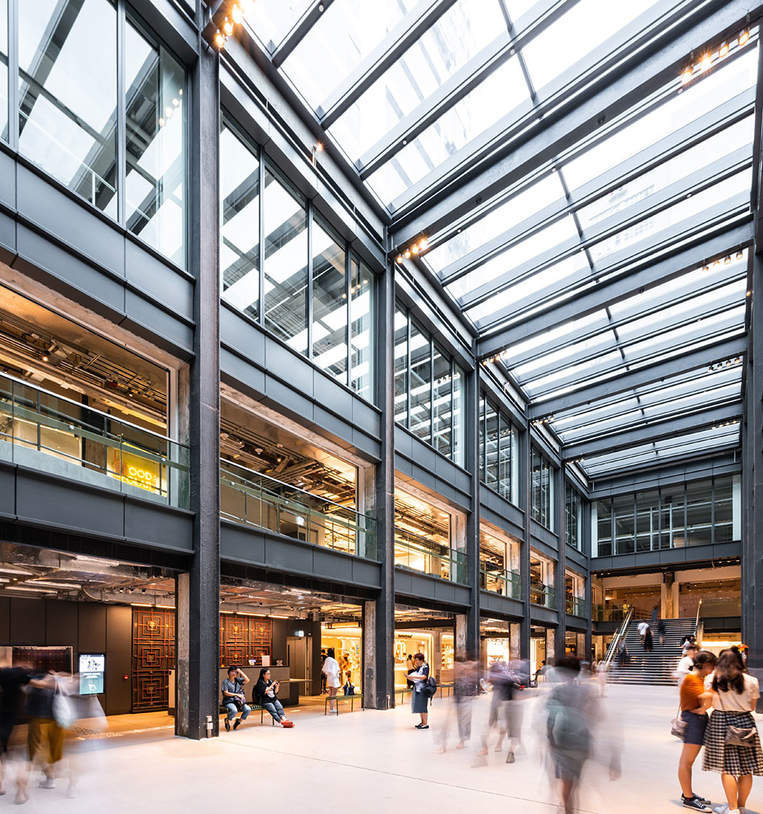 For the family-friendly attractions

A cotton-spinning factory gets new life as a cultural complex that is part art gallery, part cultural institution and part shopping destination. Discover the roots of Hong Kong’s textile industry at the Centre for Heritage, Arts and Textile (CHAT); shop upcycled goods at Alt; and let the kids run wild at the Big Things, a nature-themed indoor playground. 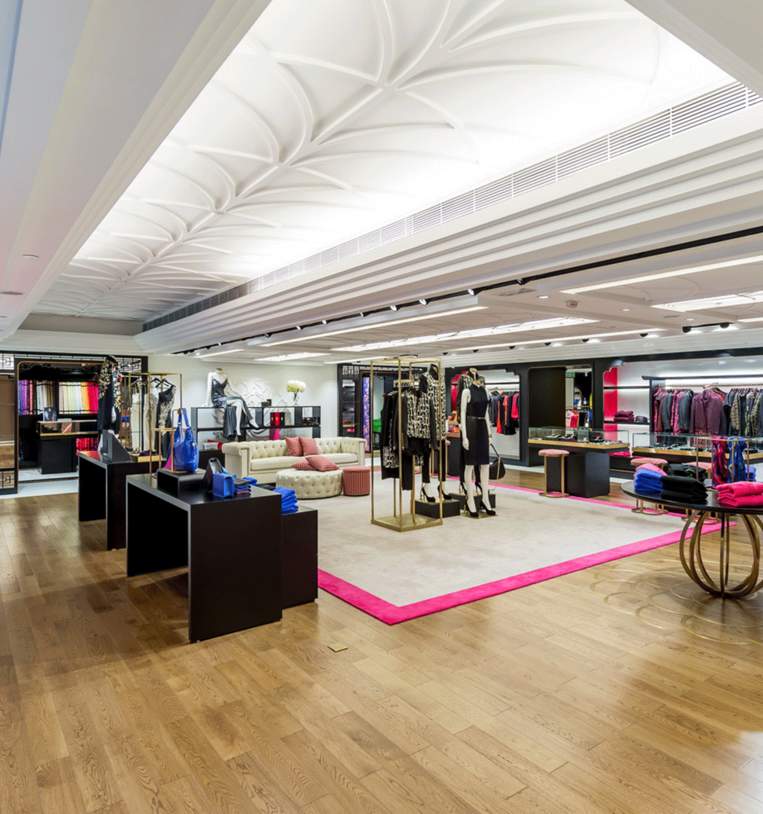 For the colourful souvenirs

This upscale chain is the ultimate place to shop in Hong Kong. Its flagship store is in a historical building, full of crazy coloured goods (handbags, leather-bound books, clothing) with an Asian twist. If you really want to splurge, get something custom-made. 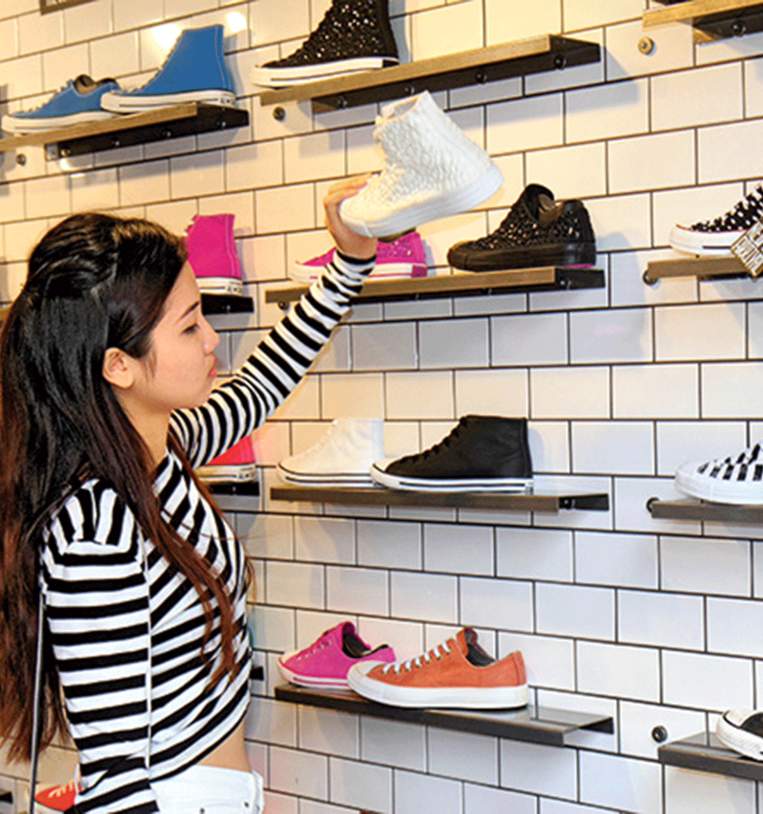 For the cool kicks

Stock up on casual footwear, from sneakers and sandals to soccer cleats and golf shoes, on Sneaker Street. Visit Toronto Sport or Walker Shop for deep discounts and rare finds. 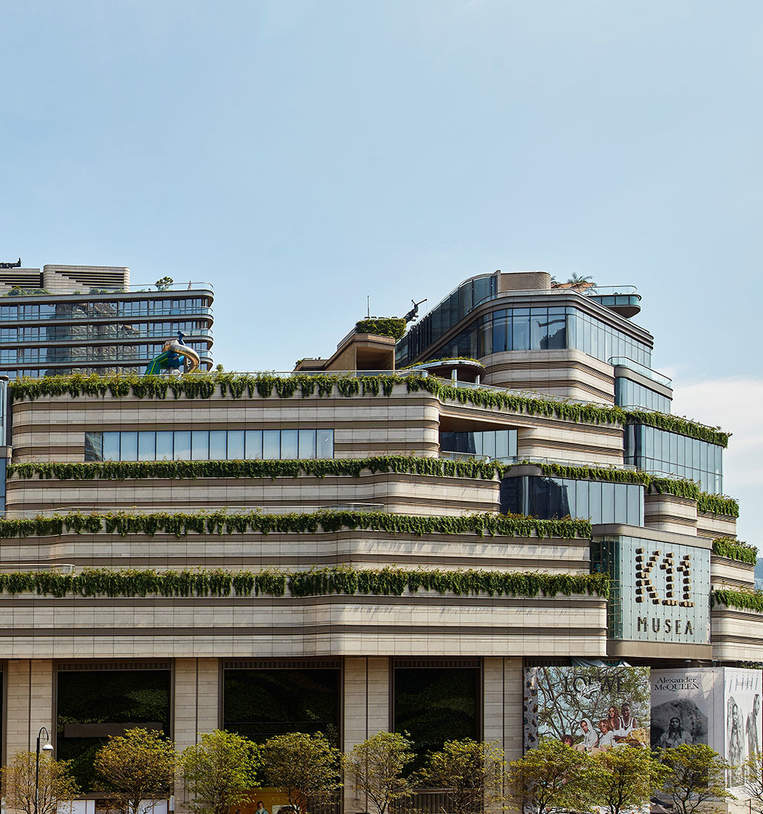 For the artful shopping experience

Art meets retail in this Instagrammable shopping complex in the heart of the Victoria Dockside. Ten years in the making, the centre features international fashion houses like Chanel and Alexander McQueen, alongside public art exhibitions and cultural programming. After shopping, head to the on-site Nature Discovery Park, a biodiversity museum and education park. 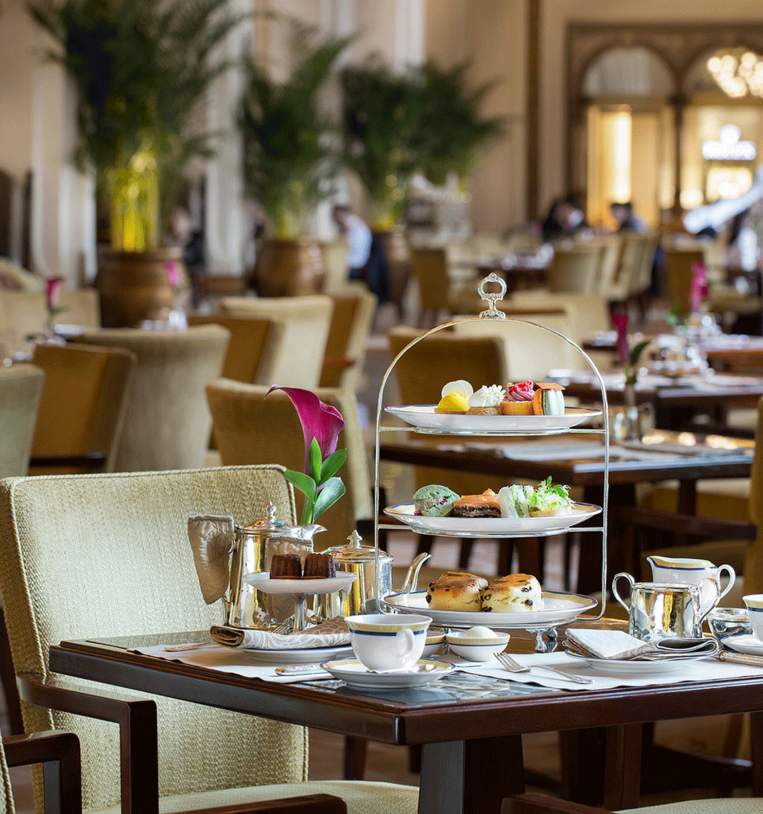 For the old-school charm

Built in 1928, Hong Kong’s oldest hotel is known for its timeless elegance and convenient location, steps away from the Avenue of Stars and the shops of Canton Road. Experience classic afternoon tea in the lobby of the Grande Dame of the Far East amid palm trees and gargoyle-adorned columns. Chef Andy Cheng’s selection of finger sandwiches and homemade pastries served on Tiffany china is a feast for the eyes – and the belly. 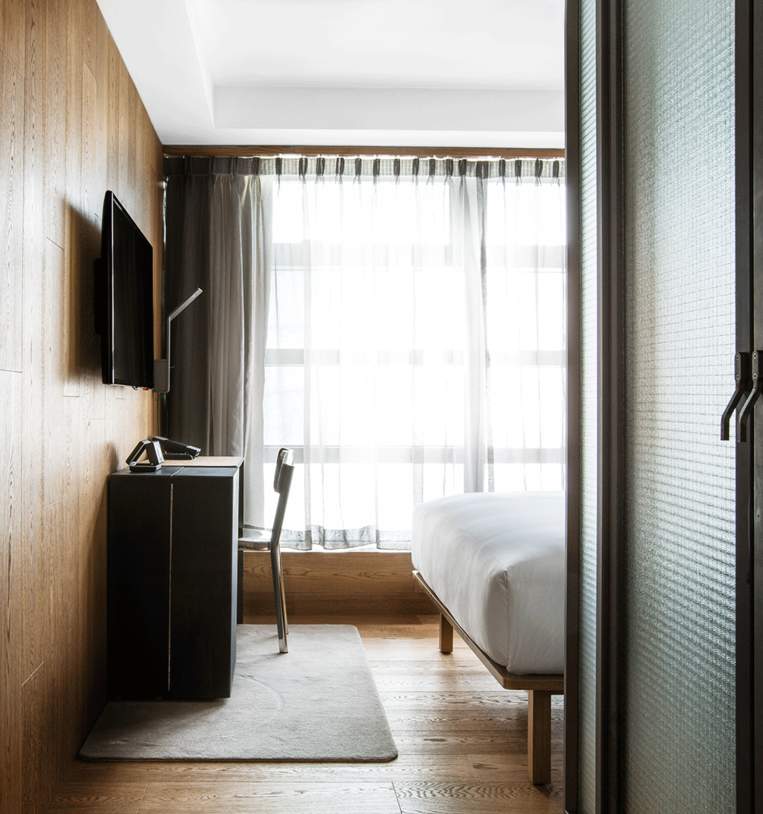 For the minimalist design

Inspired by pictures of a foggy Swedish lake during wintertime, this hotel was designed using raw materials like concrete and iron. Pamper yourself in the white marble bathrooms with amenities by Fresh. For dinner, tuck into a plate of homemade pappardelle and braised Australian wagyu beef at Silver Room, the Italian restaurant hidden behind the lobby’s steel door. 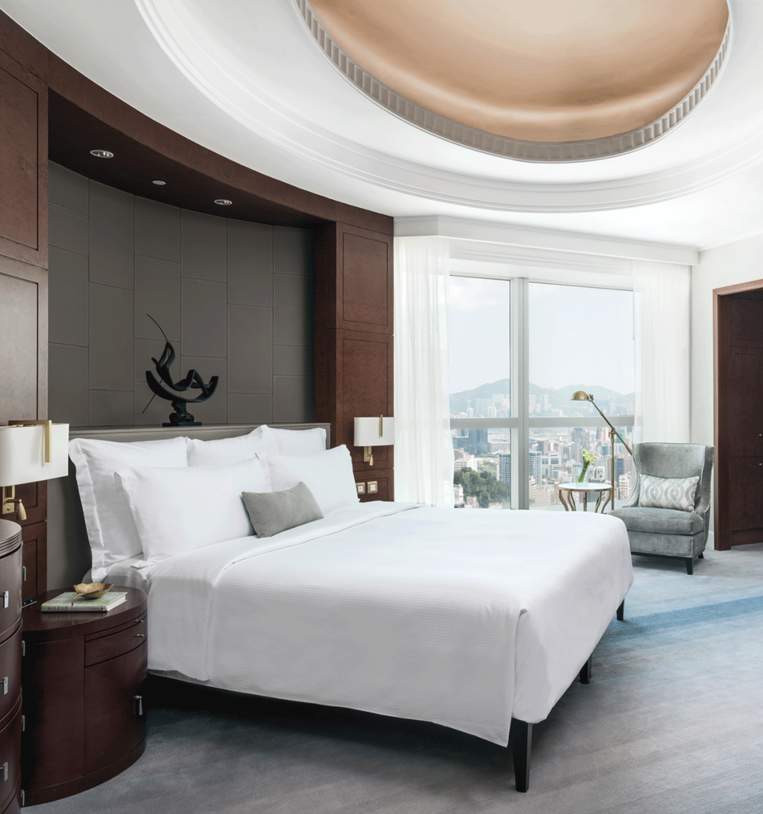 For the five-star shopping experience

This 42-storey hotel is set in the heart of the popular Mong Kok shopping hub. Recharge with a soak in your room’s oversize bathtub before heading to Ming Court for dinner. The hotel’s on-site Michelin-starred restaurant serves refined Cantonese dishes, such as suckling pig or the award-winning Silkie chicken fried rice infused with Chinese rice wine. 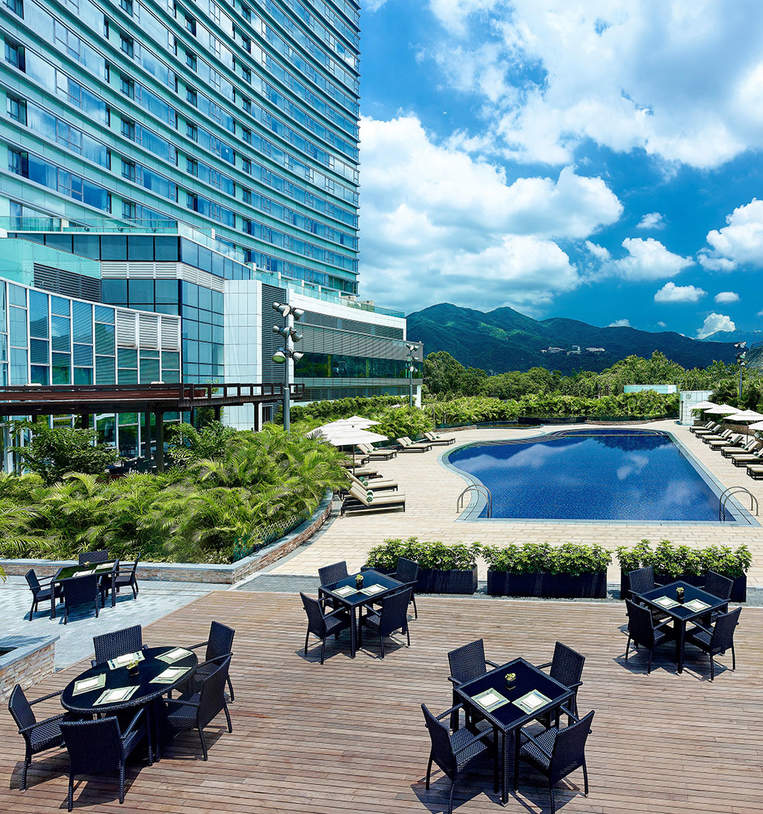 For the active traveller

There’s fun for the whole family at this hotel north of the city, with interactive activities for kids under 12, from eco-gardening and arts-and-crafts workshops to a tennis court and a 25-metre outdoor swimming pool. Rent a bike from the fitness centre and ride around Sha Tin’s Tolo Harbour to soak up Hong Kong’s mountain and coastal scenery. 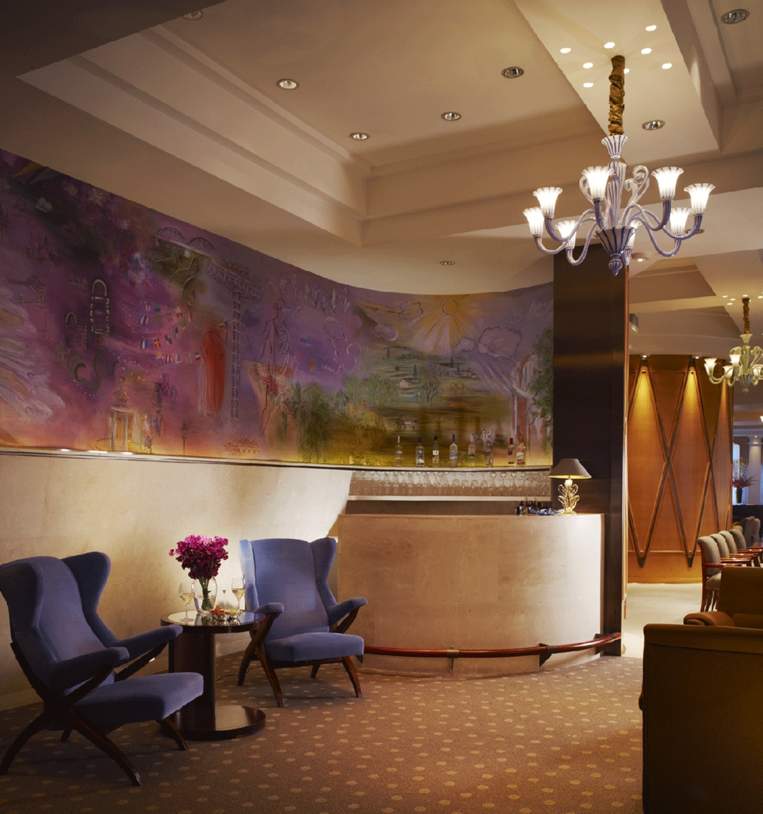 For the family-friendly amenities

Set inside a 19th-century French-style building in busy Causeway Bay, this hotel offers bright rooms with kitchenettes – complete with a refrigerator, microwave and cooking utensils – ideal for families or travellers visiting for an extended period of time. Browse the boutiques in Causeway Bay for souvenirs, then head to nearby Victoria Park for an afternoon picnic. 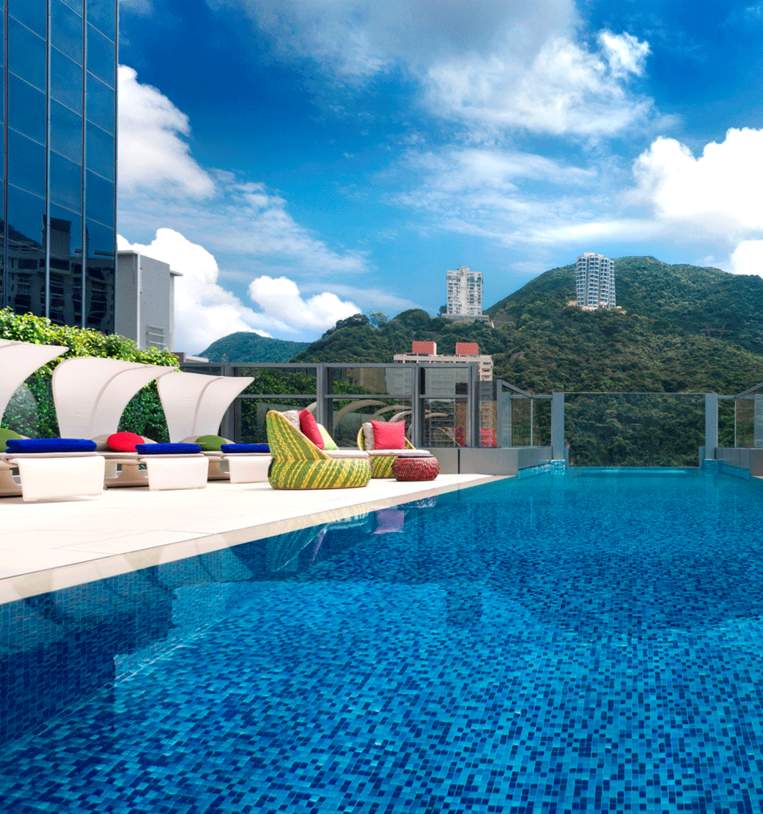 For the downtown setting

This Wan Chai hotel boasts a rooftop bar with a pool that offers views of Hong Kong’s skyline and the streets below. Spend the day exploring neighbourhood landmarks like the UNESCO-recognized Blue House, a four-storey bright-blue heritage-protected tenement building, or hunt for bargain souvenirs at Wan Chai Market. 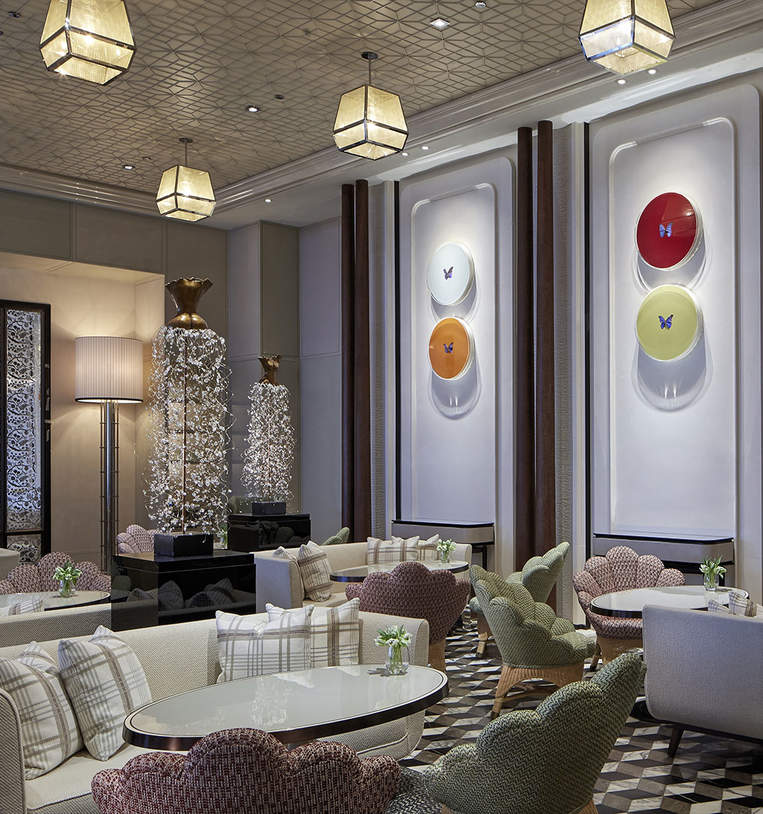 For the ultra-luxe vibes

This upscale property in Kowloon offers an escape from the bustling city. Take a dip in the outdoor infinity pool, relax with a guided meditation at the Asaya wellness centre, and re-energize with a fitness class. At sunset, head to the Manor Club on the 40th floor for cocktails and an unparalleled view of Victoria Harbour.

Getting from the airport

Relocated from Kowloon to Lantau Island in 1998, the Hong Kong International Airport is located just 30 km from the city centre. The Airport Express costs HK$115 (HK$110 with an Octopus smart card) or HK$205 for a round trip. Taxis from the airport to downtown average HK$370. Airport buses are slow but reach most locations around Hong Kong with budget-friendly fares ranging between HK$21 and HK$25.

Hong Kong’s MTR subway system reaches nearly every major location in the city. Buses are also user-friendly with destinations written in both Chinese and English. The classic Hong Kong tram (also known as the “Ding Ding”) and the Star Ferry are cheap and provide some of the best views of the city.

Cabs can be hailed nearly everywhere in the city with a flat rate of HK$24 for urban (red) taxis that operate throughout most of Hong Kong; after two kilometres the fare jumps every 200 metres and after every minute of wait time. There are additional charges for baggage and crossing the harbour. Tipping isn’t necessary, but it’s common to round up the fare and leave the change.
Urban Red Taxi: 852-2398-1881

Yakitori – every-part-of-the-bird Japanese chicken skewers seasoned and grilled over a charcoal fire – from Yardbird Hong Kong just might be worth crossing the world for. The Canadian duo behind this buzzing izakaya serve up some of the best in town. These ever-popular smoky bites started as street meat, but executive chef and co-owner Matt Abergel, who sharpened his skills in high-end Japanese restaurants, makes them finer dining.

At Yardbird, chicken is meticulously seasoned according to cut by spraying it with sake, salt and seaweed before it hits the fire. Although they serve more conventional breast and thigh skewers, offal yakitori – like crispy garlic-topped gizzard and neck skin with a citrusy ponzu sauce – established this spot as one of the city’s top restaurants and turned it into a home away from home for visiting chefs. (Bonus: cocktails made with the house line of Japanese whisky.)

When food is this simple, ingredients are everything, and for Abergel, his main ingredient is key. He sources hyper-fresh homegrown chickens (from Hop Wo Poultry, just a few blocks away), a practice that wasn’t common when he started out. The birds – a fatty local variety known as “triple yellow” – have a well-defined muscle structure, making them suited to yakitori cuts, and the restaurant uses every last morsel.