At this bright and airy Rue Saint-Joseph spot, chef Mathieu Brisson focuses on fresh ingredients from local farmers. For something sweet, try La Première Communion: French toast made with bread from Borderon et fils. Or treat yourself to the L’abbé Chamel for a taste of ham from Turlo farm in Saint-Gervais-de-Bellechasse, served on an herb waffle, topped with poached eggs, mushrooms and béchamel sauce. 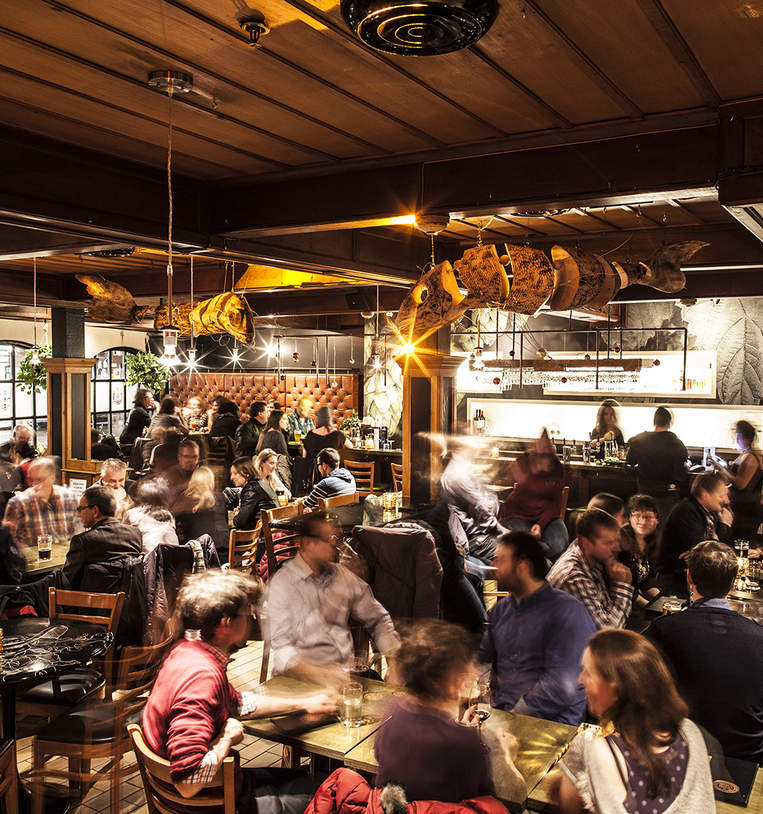 For the local brews

When early-evening drinks are in order, head to La Korrigane for a rotating selection of craft beer on a handful of taps. Among the unique brews on offer are the Emily Carter, made with Lac-Saint-Jean blueberries, and the full-bodied Urban Honey, produced from local rooftop bee farms.

For the exceptional seafood

Don’t leave Quebec City without having dinner at this oyster and seafood bar, named one of Canada’s Best New Restaurants by Air Canada in 2016. Slurp East Coast bivalves, like fatty Tatamagouches and Malpeques, washed down with fine-bubbled Crémant de Bourgogne; then move on to salt-cured mackerel with spicy horseradish, arugula and radishes. With only a dozen stools around the bar and six more at a high counter, this Saint-Sauveur find is intimate and prone to singalongs when French singer Jacques Dutronc comes on the stereo.

After a morning of sightseeing, head to this café in the heart of bustling Saint-Roch for an afternoon java jolt. Established in 2009, Nektar Caféologue is credited for popularizing coffee culture in the city with a constantly rotating selection of sustainable roasts from around the world. Ask the staff about the daily “découverte” beans, selected for their superior aromas and terroirs, or order a shot of Detour Dark Espresso, a rich and creamy blend with notes of dark chocolate, roasted nuts and molasses.

For the French bistro experience

Husband-and-wife team Louis Bouchard Trudeau and Thania Goyette bring the spirit of the Lyonnais bouchon – a convivial dining phenomenon driven by pork and Beaujolais, boisterous laughter and red-checkered napkins – to the quartier Saint-Sauveur. Dinner begins with a flight of a half-dozen-plus simple but imaginative salads – serve yourself from large bowls – and continues with hearty cocottes of rabbit confit that pair perfectly with a stubby glass of Régnié. Desserts from the sweets table are both self-serve and sublime.

It all begins with wine at Le Moine Échanson; the menu is inspired not only by the wine list itself but also by the wine-growing regions it covers. Have your server guide you through the selection; then pair your wine with the menu’s rustic comfort food, featuring seasonal, local and organic ingredients. More than just a restaurant, Le Moine Échanson is also a retail cellar offering customers the option to pre-order a bottle of wine from a selection of private imports, sourced from organic and biodynamic vineyards.

For a taste of Quebec

For the multidisciplinary arts

Perched atop Côte d’Abraham, Coopérative Méduse brings together a total of ten non-profit artistic and community organizations. It focuses on visual and media arts, photography and film and offers artist residencies, exhibits, film screenings, shows and live performances. In February, it also hosts the Mois Multi, one of the most innovative multidisciplinary events on the Quebec arts scene.

For the fashionable bowling lanes

With purple walls, round marble tables and staff members in pink retro bowling shirts, Le Royal Limoilou looks like the set of a Wes Anderson movie. Put on your bowling shoes, get the ball rolling and sip on classic cocktails (featuring Monsieur Cocktail syrups) or a signature White Russian made with cold brew from local producers Maelstrom. Avid bowlers beware: Le Royal Limoilou is only open to the public on Saturday nights.

Tucked away in the forest on the outskirts of Quebec City, Sibéria delights with a Scandinavian spa experience that alternates between hot and cold treatments, followed by a period of rest. Relax your muscles in the eucalyptus steam bath before plunging into the cold bath, complete with icy waterfall. The truly brave can take a dip in the frigid Rivière Jaune.

Away from the crowds of the old city, beneath the Dufferin-Montmorency autoroute, rise the fresques des piliers (murals on the pillars). These large paintings depict a series of surrealist scenes ranging from circus artists to a princess and her knight. They were created in the early 2000s to help revitalize the Saint-Roch district, which has since become the epicentre of the city’s arts and culture scene.

For the First Nations heritage

Step inside a traditional longhouse to learn about the myths and legends of the Huron-Wendat people or attend a powwow to experience First Nations rituals and traditions. Treat yourself to a night at the chic Hôtel-Musée Premières Nations, a four-star boutique hotel inspired by longhouses. Visit the adjacent Huron-Wendat Museum; then indulge in First Nations cuisine at La Traite with dishes like Cerf de Boileau – deer served with fresh blueberries flavoured with balsam fir.

For the local designs

This Rue Saint-Jean fashion boutique boasts a cheerful retro vibe along with a few surprises. Dresses by Quebec designers, swanky jewellery and accessories are displayed alongside charming and whimsical finds, all artfully curated by the young owners. Stay tuned for their weekly Tuesday promotions on selected items grouped under a theme. 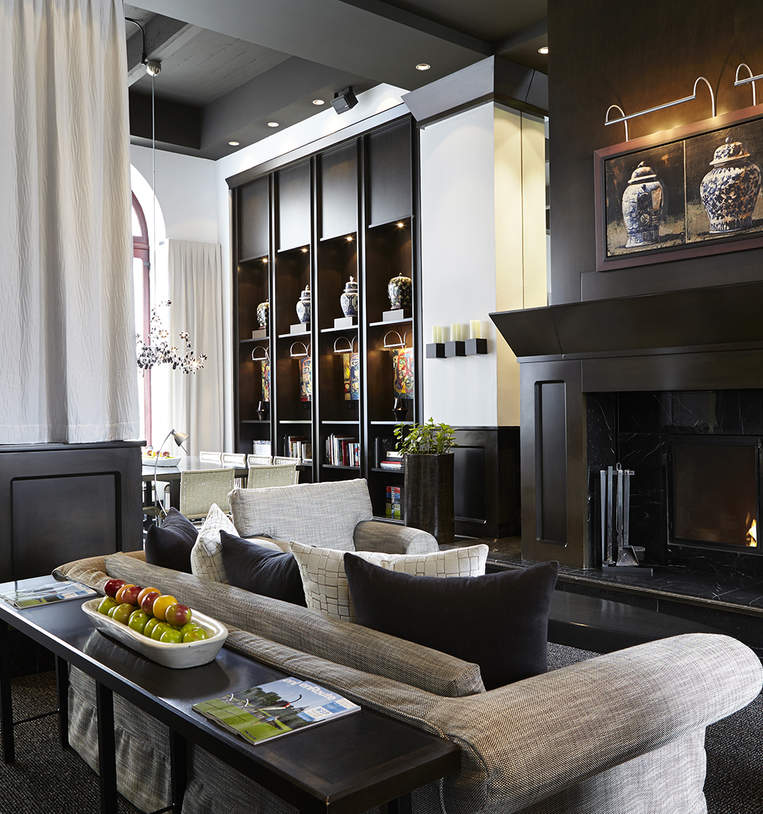 Tucked away in the Old Port, this historic property occupies the city’s first skyscraper – the eight-storey Dominion Fish & Fruit Limited building – as well as a former bank. Some of the original design elements, like the vault doors and woodwork, have been preserved. Kick-start your day with postcard views of the St. Lawrence River from your suite’s immense windows; then head down to the lobby for a pick-me-up at the complimentary cappuccino bar. 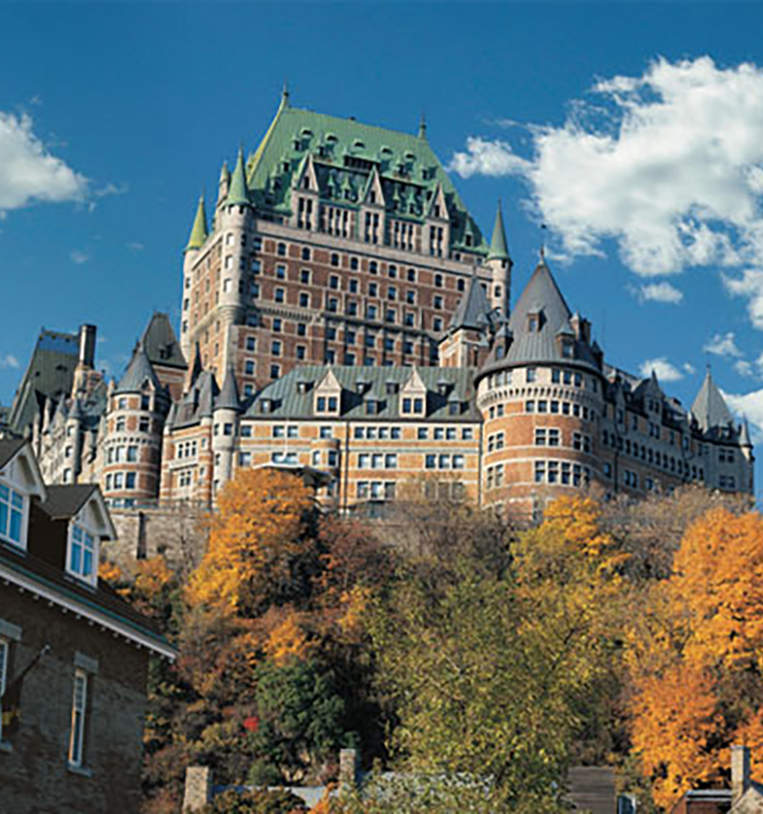 For a family-friendly vacation

Following a $75-million facelift, Fairmont Le Château Frontenac has retained its status as Canada’s Grande Dame of hotels. The Fairmont Gold treatment ensures you a room near the top of the main tower and includes services, such as breakfast and cocktail-hour canapés. For family getaways, the hotel offers child-size bathrobes, a babysitter service and discounted meals for children. Plus, the indoor pool promises to keep the kids busy year-round. 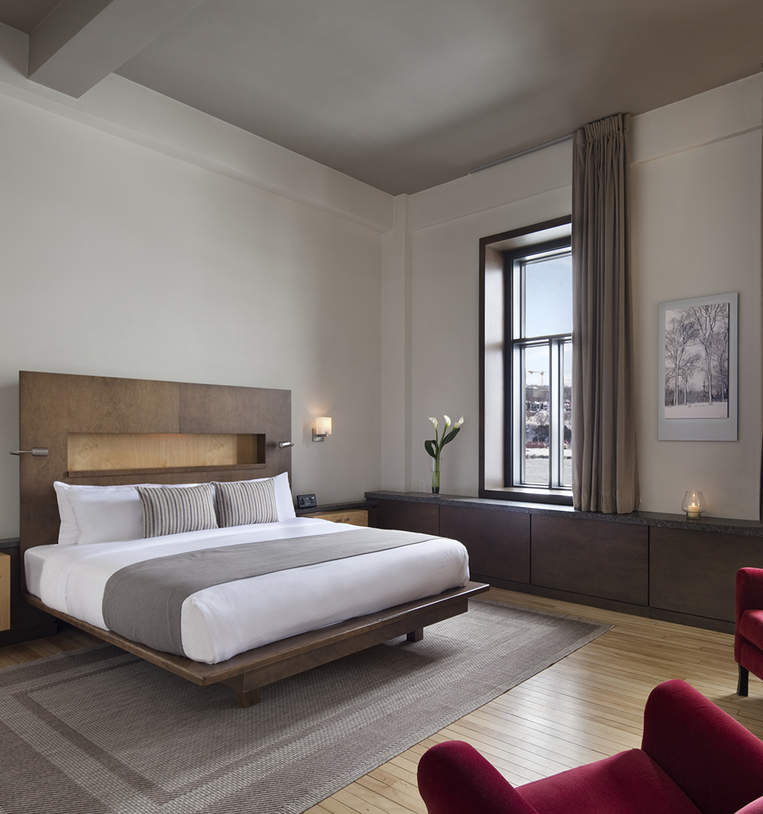 For the sheer luxury

This sleek, modern haven, hidden behind a historic neoclassical exterior, is tucked away in the heart of Old Quebec. Drift off on the ultrasoft mattress made by local company Matelas Confort, and don’t lose sleep over going home to your own bed: You can purchase a mattress through the hotel. At happy hour, raise a glass of private import wine, available by the glass at the self-serve wine bar.

For the historical artifacts

Construction of this Relais & Châteaux inn, which sprawls over three original riverside buildings, uncovered three centuries worth of artifacts. The result is an innovative hotel-museum concept, where more than 700 priceless historical finds are on display. Tour the property’s museum-quality installations, from lighted dioramas to relics of French and English rule (cannon balls, snuff boxes and dinner plates).

For a budget-conscious stay

This family-owned hotel is centrally located on restaurant-lined Grande Allée, minutes from the historic Plains of Abraham and Old Quebec. Start the day by spreading honey from the in-house apiary onto toast; then work up a sweat in the Finnish sauna before unwinding in a bubbling Jacuzzi overlooking a secluded yard. In the evening, relax by the lobby’s crackling fireplace with a glass from the self-serve electronic wine bar.

For a rejuvenating stay

Built in the 1600s, the city’s first monastery/hospital is now a 65-room boutique hotel with a focus on holistic healing programs and workshops. Guests can choose from contemporary rooms with modern furniture and private bathrooms or get the complete cloister treatment in one of the authentic rooms, complete with single beds, antique furniture and shared bathrooms. Don’t miss the on-site restaurant’s Vitality breakfasts, where diners are asked to eat in silence as a tribute to the sisters’ practice of contemplation.

For the sleek decor

Situated in the bustling Saint-Roch neighbourhood, this renovated hotel boasts minimalist design and floor-to-ceiling windows with views of the city. Take a two-hour time out at Table to sample chef Maxime De La Durantaye tapas-size dishes, including fried oysters with corn and bacon espuma and shepherd’s pie with duck confit and caramelized onions. Then burn off dinner by swimming laps in the city’s biggest hotel pool.

RTC buses serve Quebec City and surrounding areas for a regular fare of $3.50. Day passes are also available for $8.25. High‑frequency routes 800 and 801 serve the city’s main thoroughfares seven days a week, including holidays. Maps and schedules are available online. rtcquebec.ca

Although taxis are available everywhere, making reservations over the phone, online or on the Taxi Coop app is advised. Base fare is $3.45.
Taxi Coop Québec: 418-525-5191, taxicoop.ca

Four people, 400 square feet and a whole lot of lonza create the magic of this tiny trattoria.

Four people, 400 square feet and nothing to hide. The most magical meal of the year plays out in a white-tiled shoebox-size space that used to be a casse-croûte called Chez Ruth. A couple dozen lucky locals sip Soave in seats they booked more than a month ago. Charlevoix-pork lonza is coming off the slicer in paper-thin curls in this dressed-up Italian diner.

Laser-focused, Guillaume St-Pierre zests orange over a dish of endive and octopus. Since winning Les Chefs! and leading the kitchen at La Planque, he’s become even more talented. Sous chef Paul Croteau braces against the kickback of a comically large blowtorch as he crisps the skin of a softball-size stuffed quail. Sommelier Pascal Bussières pours a frappato so funky and fragrant, he calls it “malade.” Their one and only employee, Amélie Pruneau, dims the lights just as Roy Orbison pops up on her playlist. This tiny team is all in, and so are we.

St-Pierre spoons delicate quenelles of Lillet-laced chicken-liver parfait onto squares of pan-fried focaccia that Croteau baked earlier this afternoon. The crostini are topped with sweet figs and drizzled with a balsamic-lambrusco reduction. A pour of that same lambrusco, nose-ticklingly frizzante, delivers a kick of ’70s kitsch. A spark of energy runs through the albacore crudo, concealed beneath rounds of raw zucchini and laced with pistachios and green-apple vinegar. Our blowtorched quail arrives stuffed with a Marsala-veal duxelles of cremini mushrooms, atop a bundle of wilted spinach. The moat of silky lobster bisque that surrounds it captures that elusive tasting term, “minerality.”

In my five years of eating my way across Canada, I’ve fallen hardest for Quebec City. And Battuto is the purest expression yet of the scene’s human- ist, slightly kooky approach to hospitality. Peek through the windows between seatings and you’ll see St-Pierre and his posse hustling downstairs to wash dishes. The formula doesn’t scale, and it’s not supposed to: You’ve got to be in this room to truly feel how the small open kitchen becomes a bigger conversation about dining in 2017. Ever eat one of those meals that just make you want to hug the chef? Go ahead, he’s right there.