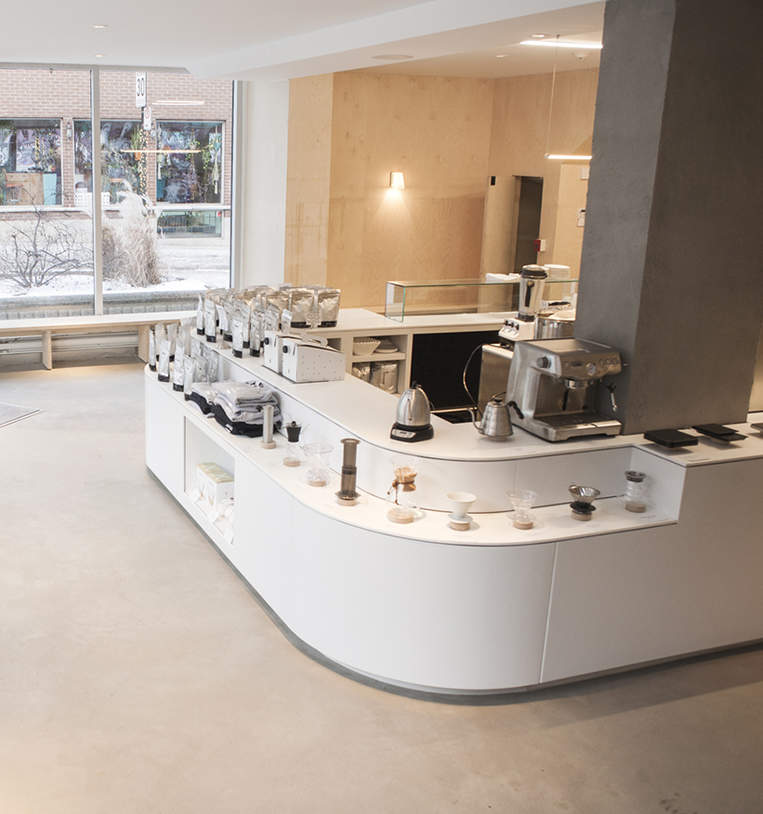 For the house-roasted brew

The Montreal roastery has three brick-and-mortar locations: a minimalist coffee shop created in collaboration with Rhoncus Design in the heart of the Plateau Mont-Royal, a flagship space in Mile-Ex and a café on the McGill campus. Pair your Dispatch brew with a selection of snacks prepared by local businesses, like vegan eatery Le Kitchen and Hof Kelsten bakery.

For a taste of Montreal's Haitian community

For the inventive menu and decor

For the DIY ice cream sandwiches

For the date-night appeal

The owners of Olive + Gourmando, a lunchtime institution in Old Montreal, tackle dinner service in this romantic Griffintown restaurant. There are no gas or electric burners; cooking happens using hardwood that’s been split and stacked in the alley out back. Puffed flatbread, topped with xeres shallots and three-cheese sauce, gets blistered in the wood-burning oven, while a deboned sea bass reaches crispy-skinned perfection on the wood-fired grill. 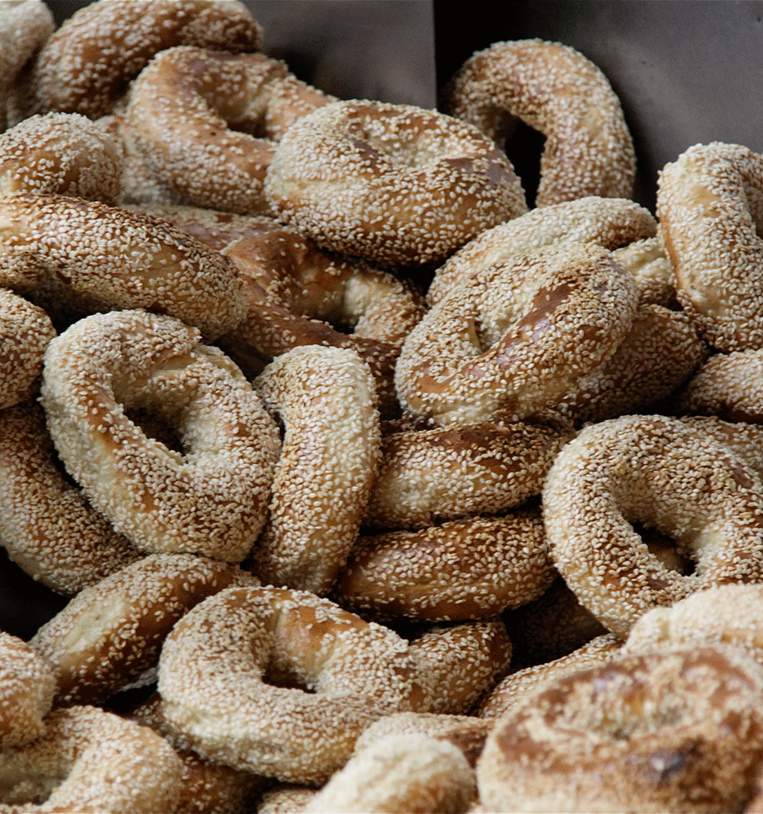 This shop has been hand-rolling bagels and baking them in a wood-burning oven since 1957. Locals, tourists and celebrities alike (it’s got Celine Dion’s and William Shatner’s seal of approval) pop into the 24-hour bakery for a dozen to go or an on-the-spot carb fix after a night on the town.

For small Bites and Weekday Breakfast

Start your morning with a cappuccino made with Portland’s Heart Roaster beans, then head back in the evening, friends in tow. Wash down small plates, like the preserved chicken, with a selection from the natural-centric wine list, or a pint of the Ghost Farm IPA, from one of the co-owners’ craft-brew side project.

For the multi-disciplinary art exhibits

Housed in a historic building built by John Ogilvy in 1861, the Phi Centre is a multi-disciplinary complex with a mission to make art accessible to as many people as possible. Look for screenings of international Cannes-awarded films and browse pop-up shops featuring products by up-and-coming designers.

For the best running route

For the sauna and spa treatments

Pop in for the detoxifying water circuit that takes you from the heat of the dry sauna or steam bath to cold baths and showers. Choose from 20 spa treatments, like the anti-aging Southern Star facial that uses the regenerative powers of monoi, bamboo and coconut, or book yourself a “Bota Bota massage,” choreographed to work in tandem with the sounds of a live harp performance. 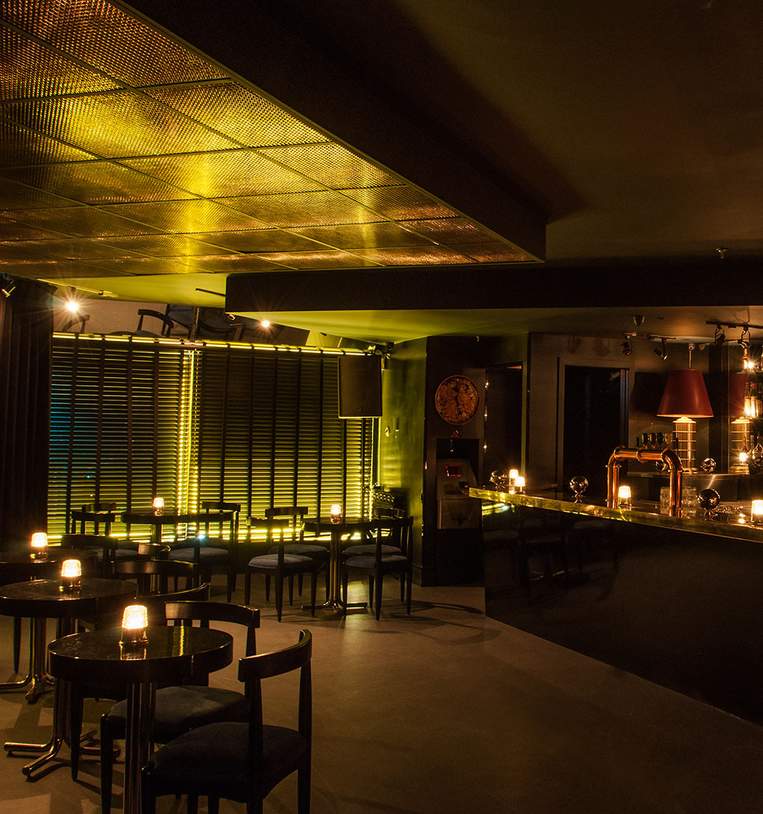 For the electronic music

Head to the only club in Mile-End, order a Berghain cocktail (named after the famous Berlin nightclub), made with vodka and yerba mate, and show off your moves on the dance floor. 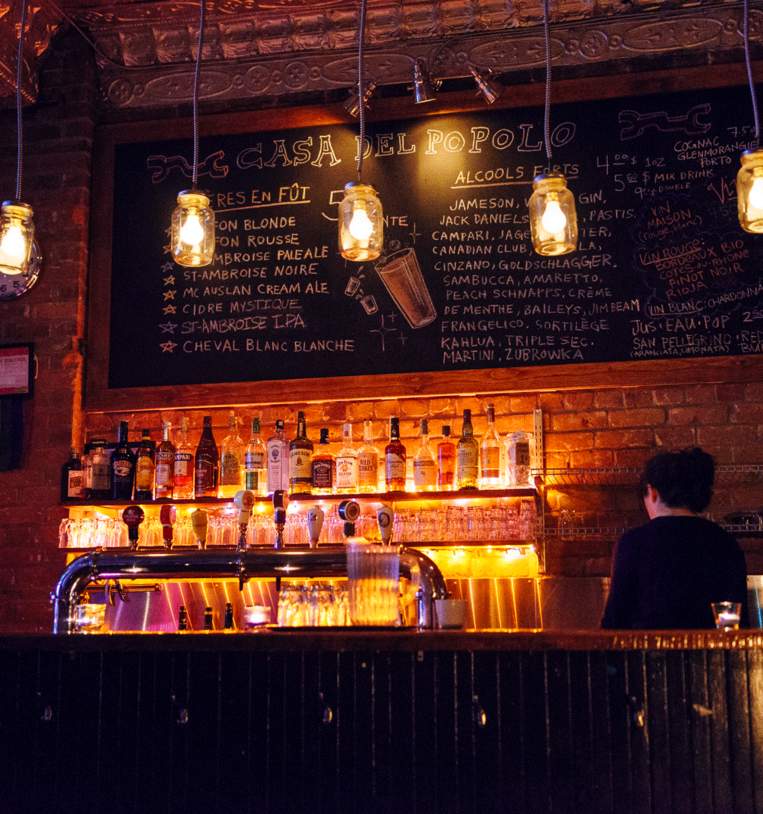 Founded in 2000 by Godspeed You! Black Emperor bassist Mauro Pezzente and wife Kiva Stimac, the “House of the People” is a family-run vegetarian restaurant, bar, art gallery and music venue. Stop by in the afternoon for a vegetarian burrito and a pint of beer, then come back at night to catch up-and-coming local and touring musical acts perform on stage.

In the summer months, bring your kids on a gentle hike to the summit for unbeatable views of the city. Then, head towards Beaver Lake for an afternoon picnic and let your little ones roam freely. In the winter months, explore the mountain while cross-country skiing along its various trails, go for a skate on Beaver Lake or toboggan down the designated slopes nearby.

Located in a former antique shop in Old Montreal, this boutique stocks a selection of apparel, shoes, books, accessories, and apothecary products. Keeping quality manufacturing in mind, Rooney’s racks and shelves are filled with fashionable everyday wear by the likes of A.P.C, Wings + Horns and Won Hundred.

For the local flair

Independent Montreal streetwear boutique OTH has an outpost seamlessly integrated into the sleek lobby so you can shop Canadian labels like Naked & Famous and Raised by Wolves. Walk through to Café Olimpico, the second location of the Mile End institution established in 1970, for an espresso or a Perrier and Stappj, a hard-to-find Italian bitter soda.

For the vicinity to festivals

This contemporary hotel overlooks Montreal’s Place des Arts, the city’s cultural hub – you’ll be steps from the Jazz Festival in the summer and the Montréal en lumière fest in the winter. Even if your visit falls between events, there’s no lack of activities: Sainte-Catherine Street boutiques and shopping malls are within a stone’s throw, and the hotel pool, surrounded by floor-to-ceiling glass windows and a skylight, offers panoramic city views and kid-friendly fun.

For a boutique hotel experience

Housed in a converted 19th century neoclassical building in Old Montreal, this 133-room boutique hotel is the perfect starting point for exploring the city’s historical landmarks. Book one of the high-ceiling suites, complete with exposed brick walls and a large walk-in rain shower, and make sure to visit Rainspa, the property’s spa with hammam.

For the convenient location

Enjoy spacious rooms with a Bose radio, goose-feather comforters and marble bathrooms stocked with Lanvin products. Conveniently located in the city’s Golden Mile, this 17-storey hotel is ideal for business travelers looking to stay in the heart of the action.

For the budget-friendly rates

This 28-room property in a renovated Old Montreal building is big on style, with mod orange-accented furnishings, restored bamboo floors and stone walls. Le Petit Café in the lobby features a mural by local graffiti and graphic-arts collective En Masse and terrific viennoiseries.

The Grande Dame of Sherbrooke Street has undergone major renovations and is home to chef Daniel Boulud’s Montreal outpost, Maison Boulud. Book a table for Afternoon Tea in the Palm Court, where the tropical atrium fresco makes for an elegant backdrop. The experience is even more refined on Mondays, Tuesdays and Wednesdays when the hotel offers Afternoon Tea guests a complimentary glass of bubbles.

The metro is the most convenient way to go between neighbourhoods. The yellow line connects you with the South Shore suburbs and Île Sainte-Hélène to access Parc Jean-Drapeau, where Expo 67 was held. One ticket costs $3.25.

See the city like a local (and save money) by hopping on a Bixi. The bike-share has over 460 stations and 5,200 bicycles navigating the city’s generous bike lanes. The system is set up for short trips; the base fee starts at $2.95 for a trip that lasts 30 minutes or less (longer trips cost extra). The season lasts from April to November.

The Uber app is really easy to use in Montreal now that the ride-sharing company is fully legal in the city. If you don’t have the app, you can download it in a matter of seconds.

This is what neighbourhood restaurants are all about: three dozen Mile-Exers cheering on a chef who’s loudly pounding out a slab of raw bison meat. When it’s served, ultra-tender and topped with a sinus-clearing hit of fresh horseradish and nasturtium leaves from the rooftop garden, it certainly deserves a round of applause.

Chef Mehdi Brunet-Benkritly met Molly Superfine-Rivera in New York, where he, an Au Pied de Cochon alum, had opened Fedora and Bar Sardine, and she was managing bar at M. Wells Steakhouse. Their corner bistro is the kind of place where a bearded stranger reading a paperback and snacking on radish stems might listen to you order and then offer you a sip of his low-intervention chenin-sauvignon from Cahors.

Brunet-Benkritly occasionally indulges his fat-on-fat experience as Martin Picard’s former chef de cuisine. A happy-sigh-inducing toast of bone-marrow-roasted whelks is topped with melted two-year cheddar. But most is on the lighter side: a lime-zest-cured Arctic char is a choreography of textures and marine flavours, with dashi gelée and poppy Tobiko roe breakdancing around crispy puffed rice and slivers of toasted nori.

A framed print of an African leopard hangs above Superfine-Rivera’s bar, where her Madame Duquet riffs on an Aviation with lemon-infused grappa. Bubbly somm’ Émilie Courtois disappears into the walk-in wine cellar, a repurposed wooden beer fridge from the dépanneur that long ago abandoned this address. She emerges carrying a bottle of effervescent, skin-fermented spergola from Emilia-Romagna and pours tastes for me and my new wine-geek friend. Plus a splash for herself, because she’s in the neighbourhood.